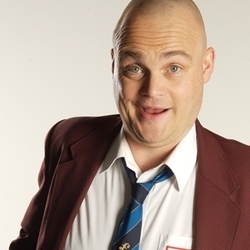 It's back! Do you wish it could be Christmas everyday? Well it is, with Compete for the Meat Christmas Special Quiz... in August! Come join the lock-in with Christmas Hats, a Christmas tree and a frozen turkey to the winners, shame on the losers. Pub Landlord's decision is arbitrary (bribes accepted). Remember... Christmas isn't just for Christmas.

It's back! Al Murray brings his critically acclaimed 2010 Edinburgh Festival Fringe show, Compete for the Meat, back to the punters with not one, but two new quiz shows... only this year there's a festive difference. Do you wish it could be Christmas everyday? Well, with Compete for Meat and Compete for the Meat Late Night it is... that's right, Christmas in August!

With his frozen friend and meaty mascot, the Mansized Rooster himself, Mr Giblets, The Guv'nor invites punters to join the fun with Christmas hats, a Christmas tree, a frozen turkey for the winners and shame for the losers. And for all the late night quizzers his six date late night special sees the ultimate pub challenge followed by a beautiful British disco and a late night lock-in.

The Pub Landlord's decision is arbitrary (bribes accepted) and remember, Christmas is no longer just for Christmas.

Al Murray's Compete for the Meat follows hot on the heels of a packed 2010 and early 2011 which saw The Guv perform a sell-out run of Compete for the Meat at the 2010 Edinburgh Festival Fringe as well as recording a version of the show for a critically acclaimed series for the channel Dave in Spring 2011, writing The Pub Landlord's Great British Quiz Book, and releasing a live stand-up DVD during his non stop tour.