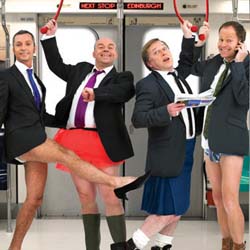 Whatever happened to 4 Poofs and a Piano? Shaken but not stirred, they're back and this time its hormonal! Everyone's favourite boy band are forearmed, forewarned in four part harmony. Join them for this brand new tidal wave of knicker-wetting madness set against a backdrop as colourful as their wardrobes. Don't forget your laughing-tackle. Guaranteed fun. Book early. 'You can never have too many pianos or too much man' (Tim Minchin), 'Has you crossing your legs with delight' (Mail on Sunday), 'Exuberance of this standard comes but once a year' (Scotsman).

Whatever happened to 4 Poofs and a Piano? Shaken but not stirred, they're back and this time it's hormonal! This year David, Ian, Dave and Stephen are storming back to Edinburgh due to popular demand with a brand new comedy show called 4 Poofs & A Piano: Business As Usual. Expect their sizzling dance routines and lush harmonies nicely packaged in their endearing comedic way to entertain Edinburgh audiences once again. Everyone's favourite "boy band" are forearmed, forewarned in four part harmony. Join them for this brand new tidal wave of knicker wetting madness set against a backdrop as colourful as their wardrobes.

4 Poofs and a Piano became famous as the house band on BAFTA and comedy award winning Friday Night with Jonathan Ross which ran on BBC1 from October 2001 to July 2010. During that time, David, Ian, Dave and Stephen became infamous for singing witty ditties to A list celebrities both here and abroad and at its untimely end, collected a huge fan base including Celebs such as Joan Rivers, Julie Waters, Tim Minchin and Elton John. During the JR series they also enjoyed enormous success in their own right, touring with Joan Collins, doing three sell out Edinburgh runs and headlining the cabaret tent at Glastonbury. They have also dueted with the likes of Benny from Abba, Neil Diamond and Jimmy Osmond to name a few.

Since leaving Jonathan Ross last year, the boys enjoyed a stint on ITV's new breakfast show Daybreak and continued to win audiences across the country with their Edinburgh sell out show Smoke & Mirrorballs. They have also continued to be a success on the corporate cabaret market both here and abroad. They recently received rave reviews at Sadlers Wells as part of the Dancing With Children charity Gala 2011, in which they spoofed Matthew Bourne's Swan Lake to a rapturous response.