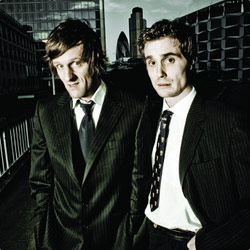 Perrier 'best newcomer' nominees in 2005, but no longer speaking to each other by 2007. As lions befriend Christians, only to be eaten by Russell Crowe, and Justin Lee Collins claims credit for Toulson's early career, it's time for the audience to take sides...are they with Toulson, or with Harvey? In a show of breath-taking ingenuity, including one of the most litigious songs ever to grace the Edinburgh Fringe, Toulson & Harvey dig up hatchets, and bury them in each other's skeletons. 'Excellent mimics and superb actors with timing coming out of their ears' (List).