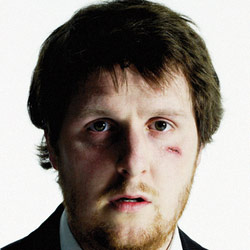 Key (jaded; handsome) brings his award-winning lurid-as-hell poetical sh*tstorm back to Scotland for a strictly limited run designed to keep him alive as a presence in Edinburgh. Key (repugnant; studious) is the scaven poet-figure from Newswipe and isn't getting any younger. The show is a grimy confusion of poetry, clambering and refrigeration. Key (gallant; flawed) is trying to engage his longtime technician Fletch (gigantic glasses; good value) to wiggle his nobs. Key's doing this as much for The Invisible Dot as he is for himself. Sell-out Edinburgh 2009, Sydney 2010, London 2010 and Melbourne 2010.