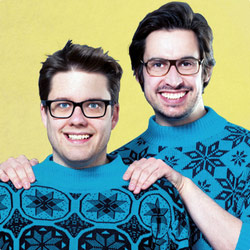 Live comedy circuit favourites The Sunday Defensive return to delight audiences with their unique blend of classic double act banter, smart character comedy and irreverent sketches. Further Complications sees Phil Gilbert and Jacob Edwards test their friendship to the limit via an argument about 8p, a treatise on why cats will eventually eat us all and a free-form jazz-bop solo on the triangle.

Following the success of their debut show Friend and Foe, the boys are now working on a number of TV projects with the likes of the BBC, Hat Trick and Big Talk, whilst still gigging on the London circuit collecting dubious honours, including performing live to a man in a gimp suit at the Camden Crawl.

Having first met in a taxi on its way to A&E, their burgeoning friendship has developed into a seasoned comedy partnership. Writing/producing credits include Edinburgh and Beyond, Jimmy Carr: Comedian DVD, Lee Mack Live DVD and Channel 4 Comedy Lab Filth. As actors they have featured in Channel 4 hits such as Peep Show and The IT Crowd.