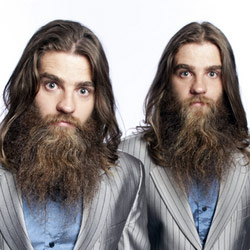 Chris and Justin are identical twin stand-up comedians, all they need now is a gimmick. As seen on TV in Australia and in the USA on NBC's 'Last Comic Standing'. With crackling one-liners and imposing stage presence these guys deliver a never-to-be-forgotten, hands-down hilarious comedy performance. 'It wasn't easy being the only four year-olds at kindergarten with full grown beards', says Chris Nelson, the younger half of Australia's only identical twin comedians. 'These fellas are destined to be household names... they've got wit, intelligence and fantastic comic timing. Thus I hate them' (Jeff Green, comedian).