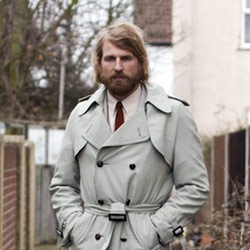 You are probably a terrorist. Or a sex offender. If not, then please specify on the risk assessment form. Sound familiar? Then come, pleasure yourself on Sanderson Jones' stand-up (comedy) about civil liberty. The show contains: the running with pancakes, fatwas, outraged viewers, John Inman, our boys, Brooke Shields, Twitter, a picture of Moses, health and bleedin' safety and the slow destruction of all the freedoms that you hold dear. 'Pick of the Fringe: 2009' (Time Out); 'His uniquely inventive style and material make him emblematic of the new direction of alternative comedy' (Scotsgay); 'Savage whimsy' (Himself).