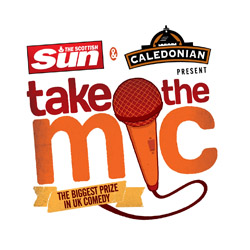 The Scottish Sun and Caledonian Brewery proudly present 'Take the Mic'. The finest comedy talent in Scotland battle it out for £12,000, the single biggest prize in UK stand-up. After over 200 auditions and five regional shows, we have a top-class comedy line-up with Gus Tawse, Pearse O'Halloran, Mikey Adams, John Scott, How Do I Get Up There? and our online winner to be announced. The week-long Fringe show is set in the world famous Caledonian Brewery. Six outstanding comedians and world renowned beer every night. What more do you need? So play your part in choosing the next Scottish comedy giant and decide who really takes the mic.