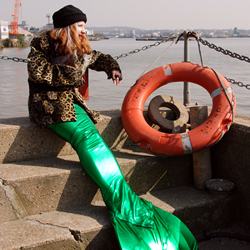 'Dark comedy at its best' ***** (ThreeWeeks); ' One to look out for' **** (One4review.com); 'Brilliant' (Stage). Returning with new characters, these 'Creatures' are like no one or no thing you've ever met! Funny, dark and ultimately uplifting.

Set at the Annual Creatures Meeting (ACM), Creatures promises extraordinary creatures with the same foibles and problems we all endure. Join an elderly, slightly doddery mermaid, a dyspraxic fairy with self esteem issues, a horse who longs to be a unicorn and a drug addicted borrower in this sublimely silly, a little bit dark yet ultimately uplifting hour of character comedy at it's very best.

Written by Susan Harrison and Colin Leggo, Creatures promises to be fun, surprising and just a tiny bit magical. Not whimsy though - this is character comedy with a more sinister edge. Creatures will also feature daily surprise guest cameos from some well known comedians and comedy actors.

Susan has been regularly performing as two of her established creations; popstrel wannabe Shakira Evans and middle class rapper Jennie Benton Smith at comedy nights on the circuit up and down the country.

Susan is a character comedian and actress whose credits include The Seagull, A'Bodys Aberdee, Pants, Night Flights and Mince (all at Dundee Rep), Too Far To Walk (with Prunella Scales, King's Head), Little Women (Theatreworks), Home East Lothian for the National Theatre of Scotland. She is also a regular at the Polka Theatre, Wimbledon, appearing most recently in The BFG and in the BBC Worldwide production of Charlie and Lola LIVE. Susan played the lead character Poppy in Urban Gothic (Channel 5).