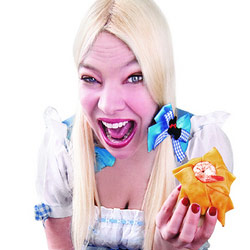 The Tokyo Comedy Store's Spring Day (her real name!) left her hippie parents in Kansas and moved to Tokyo, Japan, to make people laugh. The show is wickedly funny stand-up comedy about Spring's bizarre journey. It's a hilarious look at: the hippie family left behind, Tokyo life, learning Japanese, and the communication and cultural differences with people she has met around the world. Spring's accounts of piggybank bongs, obscene phone calls, cerebral palsy, temples, sex, sushi, and a million other things that fall in between, will leave you wanting more!