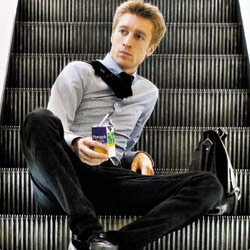 After winning 'best show' at the 2010 Melbourne Comedy Festival, Sammy J returns to Edinburgh with a brand new show full of songs, jokes, and juice. If you like your comedy served with a slight narrative, musical numbers, occasional moments of improvisation and respectable attire, this is the show for you. One of the most exciting and inventive comedians on the international circuit. 'Brilliantly unpredictable' (ThreeWeeks); 'Fiendishly talented' (Scotsman); 'One of comedy's genuinely unique talents' (Stage).

Fresh from winning the prestigious Barry Award at this year's Melbourne Comedy Festival, Sammy J returns to Edinburgh with a brand new hour of songs, jokes and juice. Join one of the most imaginative comics on the international circuit as he regales the audiences with stories and songs from life on the road. This hour will be a refreshingly honest look into Sammy's life - no characters, no fourth wall, and no co-star with a hand up something's arse.

From his earliest practical joke on a school bus to a near-death experience with a punter in Adelaide, Sammy J's sense of humour has got him in and out of trouble for the best part of a decade. And let's not forget his horrendous experience with the Aberdeen Angus Beef Burger Van in Teviot Square - but you'll just have to see the show to hear more about that! If you like your comedy served with a slight narrative, musical numbers, occasional moments of improvisation and respectable attire, this show will not let you down.

Barry Award Winner 2010, Age Critics Award winner 2008, and Best Newcomer Melbourne International Comedy Festival 2006, Sammy J has been a favourite in his homeland Australia for several years now and is fast becoming one of the Fringe's favourite performers. In Australia Sammy's songs can be heard frequently on TV and radio and Sammy has been involved in several productions at the Fringe including his own solo shows as well as the hit theatrical production Breaker Morant alongside fellow Aussies Adam Hills and Brendan Burns. Sammy J in the Forest of Dreams, developed with puppeteer Heath McIvor, was the smash hit of the 2008 Fringe Festival and Sammy's album Sticky Digits, recorded live at the Spiegeltent, is available now through iTunes.