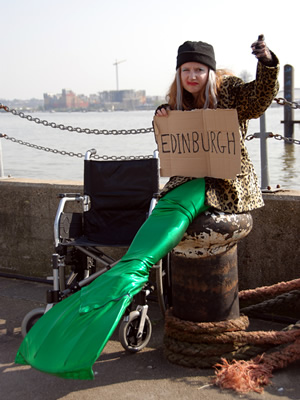 Susan Harrison is performing her character-based comedy show Creatures on the 7th floor of a hotel. Not the easiest of venues to get to, and I regrettably arrived a couple of minutes late having underestimated how many stairs would be involved. As I walked into the room, for a split second I thought I'd taken a wrong turn in the corridor as the scene that greeted me was like a business seminar. However, I realised I was in the right place when I spotted the business woman talking through some PowerPoint slides had fairy wings.

The show is based around the Annual Creatures Meeting, with the audience cast as delegates attending the ACM to witness five guest speakers from the fantasy world.

The first speaker to address the conference was a spoilt, young and very posh horse who had undertaken some surgery to obtain a unicorn horn. Hardly any props were required for the actress playing the character to make us believe she was a horse; she had every movement perfectly choreographed. What was most impressive though was that it took me almost a full minute to realise that the horse was actually played by Susan Harrison - who just moments ago greeted me as a fairy. The change in personality, voice and mannerisms was so great, I just hadn't twigged that it could be the same person.

Next up to address the audience was Ariel the Mermaid from the famous animated film. Time had not been kind to Ariel, who is now a wheelchair-bound washed up old fish. She has just one hand, a rather foul mouth and some slanderous rumours about various famous people, including her creator Walt Disney. Again, Harrison's transformation into this different character is quite remarkable.

I ought to mention at this point that to fill the gaps between costume changes, Harrison involves two other comedy actors who take on various parts too. On the day this review, the other characters were played by Shazz Andrew and Harrison's co-writer Colin Leggo. They became paramedic mice, dodgy foxes and more. Both Andrew and Leggo did a brilliant job, and in one sketch demonstrated the ultimate comedy acting skill: making the audience laugh with nothing more than just a subtle facial movement.

An angry kid dinosaur was Harrison's next character, perhaps the least well developed of her creations. I think she was actually supposed to have been a young Loch Ness Monster, but the tail was definitely that of a dinosaur.

The final character, a drug addicted tiny borrower, really showed off the carefully created props used in the show. Yet again, Harrison changed her accent, appearance, body language and just about every other facet to bring this unique character to live.

Include some illustrative slides, fun musical songs, a touch of audience participation, and more, and what you end up with is one of the most entertaining hours of the festival. I was truly blown away by Susan Harrison's acting ability - really, really impressive indeed.