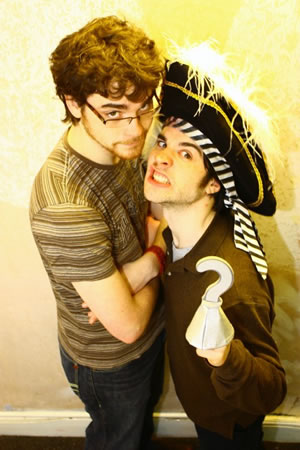 Jollyboat, a musical comedy duo from Liverpool, have everything needed to become one of the hits of this year's Free Fringe. The two brothers are instantly likeable and have some great comical songs, something they demonstrated when they totally stormed the Musical Comedy Awards Showcase on Saturday 14th.

Tom and Ed Croft open their nightly show at the Opium Bar with their best song, in which they take a number of popular modern classics and give them a unique pirate twist. It would be un-fair to quote back some of the brilliant lyrics here because, although they're funny lines in their own right, they wouldn't be accompanied by Tom and Ed's musical delivery which adds an extra layer. The duo are bouncy, energetic, smiley and have their timing spot on - it's a brilliant opening and really sets up the audience for the rest of the show.

Their second number is equally fun - it's a catchy love song, but the lyrics are, at times, decidedly less than romantic. The audience clearly love it.

As every comedy act knows, sustaining a solid hour of high-energy songs would be too much though, so the action makes way for a slow, quiet solo story next. This extended tale about superheroes takes up a good length of time, but that's fine as the story is delivered with some real subtle acting skill and has some clever gags concealed within it.

Next Tom and Ed hand over to their friend David Alnwick - a comedy magician who, by his own admission, does somewhat remind one of Ron Weasley out of the Harry Potter films. Alnwick has a confident way and is clearly comfortable bantering with the audience, but frankly his magic tricks aren't quite in the same league as some of the other more established magicians performing at the Fringe. The tricks take a while to perform, and this section probably goes on one trick too long.

A slow ballad about a fish & chip shop girl then follows. It's a slow song and, although no doubt beautifully sung, it is not intended to be comical. This is a problem frankly - most of the crowd have come for an hour of comedy, not to see a demonstration of how to sing nicely. There's plenty of music shows elsewhere on the Fringe for serious music lovers - a comedy show is not the place for something deep. It's quite a sad song, which brings the mood down a notch and undoes all the hard work the duo put into getting the energy into the room at the start.

Thankfully with the next song it is back to comedy, and a clever idea and comical accent are enough to bring the mood back up again. Jollyboat then close with a song about Jesus. Thankfully it's not a happy-clapping 'God is great' finale though but something a bit more controversial (but not to the extent it would offend). It's a great end to the show.

In summary, Jollyboat have about 35 minutes of top quality entertainment but let themselves down with a heavy lull two thirds into the show. If they can come up with a couple of sketches and/or comical musical pieces to replace the current 'filler' in the middle, they will be in possession of a solid five star comedy show. They're not there yet, but I'm sure given a year they can be. Despite the lull, Jollyboat is still the most fun I've had on the Free Fringe and so comes heartily recommended.