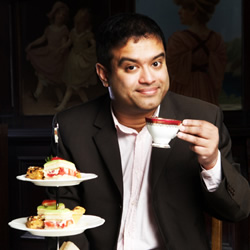 Preview shows on 4th and 5th are at different times.

Edinburgh favourite Paul Sinha has spent much of the previous decade garnering rave reviews for his self-deprecating tales of his life as a GP, lovelorn gay bachelor, quiz fanatic and social coward. This year, he doesn't want to discuss turning forty, because he has bigger fish to fry. A racist called him a racist. Paul would like to fight back. 2009 reviews: 'An exceptionally skilled stand-up... truly wonderful' (Scotsman); 'A triumph... explosive punchlines and laser guided political asides' (Independent On Sunday); 'Reassuringly intelligent and very funny' (Observer); 'Sublime punchlines' (ThreeWeeks); 'Extraordinarily funny' (Skinny).

In the last few years Paul Sinha has established himself as one of the most critically acclaimed comedians at the Edinburgh Festival. He first came to prominence at the 2006 Festival with his show Saint or Sinha?, using the experience of coming out of the closet to his Dad as a parable for modern Britain.

His 2007 follow up King of the World was a hymn to nostalgia, seizing the day, and the redemptive qualities of Las Vegas casinos. Last year's show 39 Years of Solitude told the unusual tale of how becoming the 60th ranked quizzer in the United Kingdom had helped compensate for not having had a boyfriend since 1991.

A year on, Paul is still single, but has risen to 28th in the UK quiz rankings (May 2010). As well as travelling the globe telling tales, he has made numerous radio appearances on shows such as Just a Minute, The News Quiz, The Now Show and Fighting Talk, and contributed to a plethora of topical discussion programmes. On one such occasion last October, Paul suddenly found himself discussing race relations with none other than Simon Darby, the deputy leader of the British National Party. Surely the collision between the uber-metropolitan values of a British, gay, Asian GP and the rather
less exotic beliefs of the BNP would make for uncomfortable listening?

In his new show Extreme Anti-white Vitriol, Paul casts his discerning eye over the complex network of bigotry and prejudice that seems to underpin British society. Far from simply pointing an accusing finger at racism, he will look at the various forms of tribalism that pit extremism against tolerance, bed & breakfasts against gay couples, the dispossessed against Old Etonians and the Daily Mail against practicallyxeverything.

Is this "Broken Britain"? In the aftermath one of the most bitter, angry and downright confusing general elections, Paul will be using his customary mix of social comment and self-deprecating stories to try and provide a definitive diagnosis.

'There's a new sharpness to Sinha's writing and delivery; he sustains the quality throughout and deftly slips in brilliant political observations.
Reassuringly intelligent and very funny.' Observer

'A masterful, seamless compilation of self-deprecating anecdotes... with its explosive punchlines and laser-guide political asides, it's a show that could make him a star.' Independent on Sunday

'A feat of beautifully constructed storytelling. Extraordinarily funny.' The Skinny