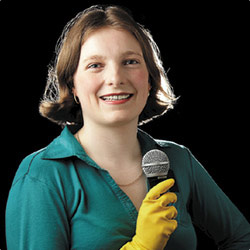 Obsessive compulsive clean-freak Gill Smith has just become a mum for the first time. Join this award-winning comedian as she carefully counts all the highs, and perfectly evenly spaced lows of new parenthood. Discover whether habitual hand-washing, shoulder sick, and nightmare nappies have been enough to stop the even-numbers fanatic from wishing she'd had twins, or whether she's made of sterner - and tidier - stuff. Has having a baby forced her to face her fears, or just been the perfect excuse to buy a bigger steriliser? Bring your own wetwipes. 'Genius!' (Herald). Free!

Gill Smith is bringing the World Premier of her third solo stand up show OCD: The Next Generation to the Edinburgh Fringe Festival, before touring around the country.

Following hot on the heels of her 2008 show OCD: My Family and Other Anals and her 2009 solo show OCD: Truly, Madly, Neatly, performed at the Edinburgh Fringe while pregnant, Gill now takes a look at Obsessive Compulsive Disorder with
a baby - is it possible to still be, and if so, will she pass this on to the next generation?

Gill says "I grew up in a household full of 'quirks,' but until I started stand-up, my own and my family's Obsessive Compulsive Disorder moments used to be strictly private. But after the amazing response to 2008's Edinburgh show (also at Henley Fringe 2008 and Brighton Fringe 2009), I got even more fervently fanatical about everyone else's than I was already. It's gone from a faint fascination to a full-on funny foible fixation!"

The show, which is Gill's fourth as part of the Laughing Horse Free Festival, covers a wide range of topics, from nightmare nappies and shoulder sick, to whether, like Gill herself, the next generation will be encouraged to play with her food.
A regular around the national comedy scene, Gill Smith hasn't let maternity leave stop her planning an Edinburgh Fringe show she believes may be her best yet - and all inspired by her already worryingly control-freak daughter.

Of this year's show, Gill says "I'm really excited to be doing a solo show again in 2010. I've been coming to the Fringe, and reviewing other people's shows at it for many years. I've performed solo shows for the last two years, and despite a large
'bump,' hosted an additional topical comedy show in 2009, so I feel like part of the furniture at the Fringe.