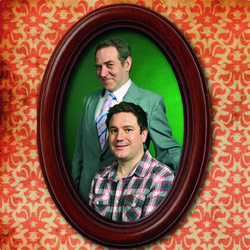 Dennis Hazeley (actor, delusional) and his father Don (excruciating, Grimsby-based) offer up fun and dysfunction. Gasp as the family skeletons topple out of the closet: Don's magic hand trick, Dennis's letter from Rudolf Nureyev and a treasured, albeit Nazi, heirloom. For anyone who looked at their father and craved adoption. Starring Perrier nominee Rufus Jones (Dutch Elm Conservatoire, Lead Balloon, Peep Show, Nelson in Mongrels) and Alex Kirk (Peep Show, Jam & Jerusalem). 'Hilarious...One of the most amusing shows on the Fringe' (Scotsman, on 'Dutch Elm'); 'A good head above the rest...' (Sunday Times, on 'Dutch Elm').

Perrier Award nominated Rufus Jones (Dutch Elm Conservatoire) and Alex Kirk ("Comedy gold", The Observer) bring you a pair of brilliantly crafted and hilarious characters in their new show No Son Of Mine.

Look on as Don destroys Dennis's dreams in an hour of fun and dysfunction, as more and more skeletons topple out of the family closet with alarming results. See Don's Magic Hand Trick, Dennis's letter from Rudolf Nureyev and a treasured - albeit Nazi - heirloom. Don and Dennis are a double act for anyone who ever looked up at their father and yearned for adoption.

Rufus and Alex have been regulars on the London sketch and character circuit with No Son Of Mine for the last year.

Rufus co-founded the highly successful sketch group Dutch Elm Conservatoire with Dan Skinner (Angelos Epithemiou) and is in demand as an actor and a writer. Recently, he and Dan wrote and starred in Movie Mash, a Channel 4 Comedy Lab. They have also just written and starred in Angelos Epithemiou's Big Issue for Radio 4, and have spent the summer at the World Cup in South Africa doing video diaries for The Sun Newspaper's website. As a performer, Rufus has appeared in TV comedies Peep Show, Extras, Lead Balloon and many others. As a writer, Rufus has written for performers such as Jon Culshaw, Mitchell & Webb and Katy Brand. He also wrote No Son Of Mine.

Rufus also stars in the BBC3 series We Are Mongrels, the new puppet show for grownups. Rufus voices Nelson, the metrosexual if slightly hopeless fox.

Alex Kirk is also in high demand as both a writer and actor. He has co written and appeared in the BBC series for Rik Mayall, Tales Of Uplift And Moral Improvement. He has also written for John Thomson. As an actor he has appeared in many TV comedies including Peep Show, Katy Brand's Big Ass Show, Two Pints of Lager and a Packet of Crisps, Jam and Jerusalem, Spaced and Armando Iannucci's Time Trumpet amongst others. Alex also performed as part of the comedy double act Kirk and Messingham.