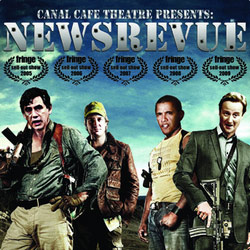 A compilation of the year's best material from the Canal Cafe's London shows. NewsRevue lampoons everyone from the spheres of politics and celebrity and is performed live by four performers plus an on-stage musical director (a post previously held by Bill Bailey). NewsRevue's exceptional writing, outstanding performances and ever-original takes on current affairs have made it a Guinness World Record breaker, Fringe First winner and a Perrier finalist. 'With performers this good and material this fresh, NewsRevue 30th Anniversary truly deserves its place in the Fringe hall of fame' (Fest); 'A rite of passage for all comedy newcomers' (Chortle.co.uk).