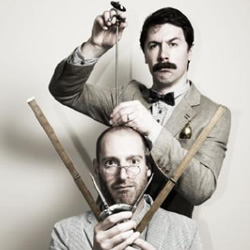 For Roy, promising new assistant at Reading Library, life is just as it should be. Much like his beloved alphabet it is ordered, predictable, with everything in its place. That is until a mysterious stranger, seeking a book called The Golden Lizard, blows Roy's routine to smithereens. Roy is dispatched on the mission of a lifetime. He must find The Golden Lizard and its author - the radical scientist Floyd Vernon - before they fall into the wrong hands and/or before it's too late, or whichever comes first. His quest takes him by land, sea, air and mind from Berkshire, via Bolivia, to beyond the outermost reaches of science. Or does it?

Henry Paker won the Leicester Comedian of the Year Award in 2008 and has performed stand-up as part of The Comedy Zone (Pleasance 2008), Nuts TV Comedy Club, Paramount Comedy's Edinburgh and Beyond and Paker/Richards at the Edinburgh fringe Festival 2009. Henry writes for Mock the Week and 8 Out of 10 Cats. His cartoons appear regularly in The Times and have been published in two books - Don't Arm Wrestle a Pirate and Why Steve was Late: 101 Exceptional Excuses for Terrible Timekeeping.

Henry and Mike both appeared in sketch show Superclump and site-specific cult-hit The Hotel at Edinburgh Fringe Festival 2009.