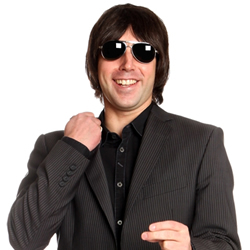 Mike Newall is Mr Famous... well that is a title given to him by his friends because of his glamorous career as a stand-up comedian. The show is a year in the life of Mr Famous. An insight into his life, the sex, drugs and rock'n'roll... the car journeys, B&Bs and bacon rolls! A journey of highs, lows, ambitions and tales of the people who have an impact on and influence his life.

Mr Famous is a name given to Mike Newall by his friends because of their perception of his 'glamorous' lifestyle as a stand-up comedian and an incident in a taxi 2 years ago. The name has stuck ever since and in those 2 years Mr Famous has had his fair share of ups and downs.

An excellent storyteller with a laid back style and a sharp eye for the funny in everyday situations this is a story of the last 2 years in the life of Mr Famous. How getting debilitating sciatica at the age of 28 could have been caused by being the youngest of 4 brothers before his parents longed for daughter arrived, the intricacies of dealing with those over friendly and chirpy neighbours, the sexual politics of practicing chiropractics for the 1st time and how the death of one of his best friends within the last year brings back touching yet silly stories of their escapades together. This is a debut show full of laughs from one of the North West's latest comedic shining lights. A true life story of Mr Famous.