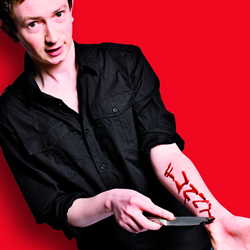 This rising star and Critic's Choice (Guardian, List) returns with new tales of embarrassment and redemption. But mainly embarrassment. Does telling people about your most mortifying moments make you feel better or worse? Come and watch Matt find out, live on stage!

After his sell out run in Edinburgh last year with Truth and Pleasure, rising comedy star and Critics Choice (the Guardian, The List) Matt Green is back at the fringe this year with his third solo show. Bleeding Funny is full of tales of embarrassment and redemption. But mainly embarrassment.

We all get embarrassed. It's a fact of life*. But for Matt almost anything can be embarrassing. All through his life he's been awkward in social situations, with often hilarious consequences (hilarious for his audiences, not for him).

In this show Matt shares some of his most mortifying moments and tries to understand where all this awkwardness began. Can he break free of his very English reserve? Can stand up skills help you in real life? Or is the alternative to being easily embarrassed actually just being a dick?

Matt has been performing stand-up since June 2003 and is now a regular at the main clubs in London and up and down the country including The Comedy Cafe, Banana Cabaret, Jongleurs, The Frog and Bucket, The Stand etc. He is also the resident MC at the 99 Club in Islington. He performed with Arthur Smith and Friends at the Cabaret Marquee at the Glastonbury Festival, a gig which was recorded for Radio 4 and also has performed at the Lyric Hammersmith alongside Richard Herring, Chris Addison, Nina Conti and Stephen Merchant.

Matt is forging a career on Television and Radio too. Currently he stars in the Radio 4 comedy drama Inspector Steine, based in 1950's Brighton and written by best-selling author Lynne Truss. His TV credits include The TV Book Club (Channel 4) Comedy Cuts, Comedy Lab, Comedy Showcase, Extras, Garth Marenghi's Darkplace and Two Pints of Lager and a Packet of Crisps. Other Radio credits include Ed Reardon's Week and Cabin Pressure.