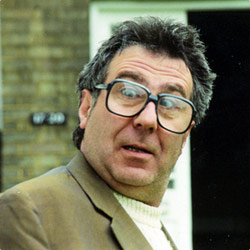 When a drunk Malcolm Hardee fell to his death in the Thames in 2005 the ripples were felt throughout the comedy community. Local hero, entrepreneur, compere and criminal, Malcolm is often hailed as the unsung 'Godfather of alternative comedy'. His clubs in South East London are remembered as the 'alternative of the alternative', a place where Britain's best-loved live acts earned their stripes facing the hardest crowds ever known. And where Malcolm would usually get his knob out. Friends and family tell his story: Arthur Smith, Jools Holland, Mark Lamarr, Vic Reeves. And his mum.

The Tunnel features Harry Enfield, Simon Munnery and other top comics in the untold story of London's most notorious comedy club, run by the late Malcolm Hardee, godfather of British Alternative Comedy. The Tunnel is a 'taster' for a larger Malcolm Hardee documentary currently in production by Jody VandenBurg and Naomi de Pear: Malcolm Hardee: All The Way From Over There.

The Laughing Horse Free Festival screenings in Edinburgh will include the 32-minute documentary The Tunnel plus a trailer for and extracts from Malcolm Hardee: All The Way From Over There featuring some of the top names in UK comedy.