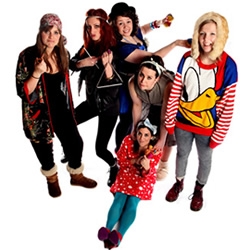 All female sketch group Lady Garden, return to the Edinburgh Fringe Festival with a brand new show, bringing their observational and intricately choreographed humour to the Pleasance Beside.

Lady Garden have taken the comedy circuit by storm since their debut in 2008, becoming one of the 'most exciting and laugh-out-loud funny young sketch groups around' (Time Out) due to 'gentle parody, well thought out satire and expert timing' (The Times), culminating in shows that are 'as intricate as an opera and ten times more fun' (Chortle).

The troupe, who met at the University of Manchester, have performed at major comedy festivals including Manchester, Brighton, Sheffield and Leicester as well as at Glastonbury. In 2009 they secured a 12-month BBC development deal which will see them produce a taster later this year, as well as performing on BBC Radio 4's Front Row.