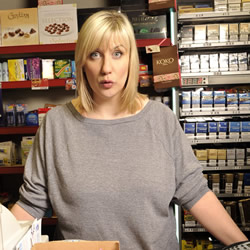 Comic poet, stand-up and sometime journalist Kate Fox, anchors her dramatic life story to the big news events. While The Satanic Verses burned in Bradford, Kate hit the local headlines after eloping with a gunrunner. As the Twin Towers fell she was spinning it into a soundbite for local radio. From the Thatcher years via the Yorkshire Ripper to Princess Di and foot-and-mouth, Radio 4 Saturday Live regular Kate Fox asks where you were when the news broke?

In Kate Fox News, comic poet, stand-up and sometime journalist Kate anchors her dramatic life story to the big news events. While The Satanic Verses burned in Bradford, Kate was hitting the local headlines for eloping with a gunrunner. As the Twin Towers fell she was crafting it into a sound bite for local radio news. She wished Tony Blair was her Dad, and found out the Yorkshire Ripper drove lorries for her Auntie. From the Thatcher Years to MP's expenses and volcanic ash Kate asks; where you were when the news broke?

Based in Newcastle, as well as her work on Saturday Live Kate writes poems for BBC 2's Daily Politics Show (including writing and performing a poem to commemorate Gordon Brown's first 100 days in office) BBC2's Chelsea Flower Show coverage, conferences, schools and festivals. She has also appeared as a columnist on Radio 4's You and Yours.

Kate Fox News was developed while she was the Associate Artist for the Live Literature Consortium (a national network of eight live literature producing venues based at Arc, Stockton) and the Associate Writer at New Writing North. She has recently performed at many festivals including Latitude, Cheltenham Literature Festival and Aldeburgh Poetry Festival. Kate has also published two volumes of her poems from Zebra Publishing.