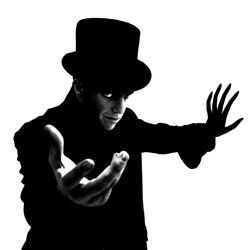 Direct from the Melbourne International Comedy Festival, John Robertson brings you the best bits of world history, with all the fun, gory stuff left in. There'll be puppets, Rasputin, ukulele, torture, vampires, bolsheviks, Jack the Ripper and a whole galaxy of rogues and rapscallions. Now with bonus guinea pig, top hat and black plague. 'The highlight was Robertson... he's funny and sharp' (Daily Telegraph, Sydney); "You could do worse than see his show, but you'll rarely do better." - Australian Comedy Review; One of Zoo Weekly's Top 10 Young Aussie Comics.

After sell out seasons at the Melbourne International Comedy Festival and Western Australia's Wild West Comedy Festival, Australian comic John Robertson brings his award winning comedy show A Nifty History of Evil to the Edinburgh Free Festival Fringe. It's a show for boys and girls of all ages, especially the dark ages. It's a manic journey through history's biggest bastards, with all the icky bits left in. Join sexy bad guy Robertson as he pulls out puppets, vampires, a ukulele, blood, gore, the Marquis de Sade, Stalin, Hitler, exploding dogs and all manner of rogues and rapscallions. It's fun, it's frantic ...it's the comedy of your nightmares.

"Manic genius... one day, he will take over the world." - Word of Mouth Reviews Dot Com

"an entertaining and informative show... a unique take on black humor" - Beat Magazine.

"The highlight was Robertson... he's funny and sharp" - The Daily Telegraph (Sydney)

John Robertson has toured the world as an MC and comedian. In 2010 he was named as one of Zoo Magazine's Top 10 Young Aussie Comics. He has toured with Wayne Brady (US), Mark Watson (UK) and a host of others. A Nifty History of Evil is his fourth solo show in as many years, recently picking up both the Critic's Choice and Artist's Choice awards at Australia's Wild West Comedy Festival.


24 year old John Robertson is a comedian, writer and MC from Australia. A diverse kind of guy, he tours the world hosting festivals and appearing in clubs and theatres.

Starting comedy back in 2002, his first solo show, "Killing Hun in the Sun" was nominated for the Equity Guild Award for Best New Play and toured to the Melbourne Fringe as "Hunting With the Colonel" in 2006.

In 2008 John came third in the national Green Faces Comedy Competition, featured in the Melbourne International Comedy Festival Showcase the same year and has since performed with Wayne Brady (Whose Line Is It Anyway?), Mark Watson, Fiona O'Loughlin, Tommy Dean, Tom Gleeson, Kitty Flanagan, John Moloney, Eddie Brimson, and many, many more!

John toured to the Edinburgh Fringe Festival in 2009 and was rewarded with a four- star review. His third solo show, "Don't Swallow: A Handy Guide To Keeping Your Head Above Water (In An Ocean Filled With Shit)" enjoyed a sell- out run at The Blue Room Theatre in August 2009. John was recently awarded both the Critic's Choice and Artist's Choice Awards at Australia's Wild West Comedy Festival for his show A Nifty history of Evil.

A versatile speaker, puppeteer and ukulele player, John is the resident MC for the Supanova Pop Culture Expo and the Under The Blue Moon Goth Festival.