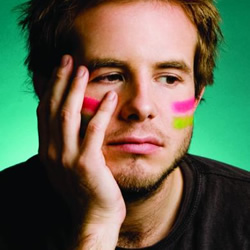 Jimmy McGhie returns to the Fringe with his second solo stand-up show after his acclaimed debut, The Northern Meeting. This year he explores his lack of drive with stories of trips to Berlin, Africa and Tesco Metro - in a show about potential and how to unrealise it.

Following the critical success of his 2009 solo debut, The Northern Meeting, Jimmy McGhie returns to the Festival with his second full-hour of confessional, character-filled stand-up. This year he explores his lack of drive in a show about potential and how to unrealise it.

Since Jimmy was last in Edinburgh he has fallen foul of faceless estate agents, learned American, been to Tesco Metro (a lot), fully mastered Apple's entire product line, become a dolphin and tried desperately not to fall in love with a hippy.

Jimmy did manage to go to Africa but did not have the requisite epiphany or return to start a charity. Whilst he was interested in the colonial legacy and the absolute power of dictators, he mainly noticed that there are quite a lot of wankers passing-off a hedonistic holiday as humanitarian help.

Finally he did the two most shameful things he has ever done in his life.