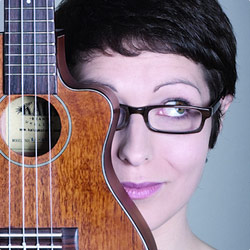 Comic songs, ukuleles and stand-up to take you through the highs, lows and heartaches of looking for that perfect someone. Helen's debut comedy hour looks at modern love. If Juliet were alive today, would she still choose secret trysts and double suicide over a fixed-rate mortgage and awkward Christmas dinners with Romeo's parents? And would she spend August in a cave singing songs about it on the ukulele? 'Charming, witty, warm with great one-liners.' **** (List); 'Engaging, twinkly-eyed stage presence.' (Chortle.co.uk); 'Irreverent and heartfelt' (BritishTheatreGuide.info); 'Geeky' (Time Out).