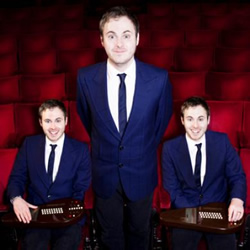 Gareth was nominated for Best Newcomer in the Edinburgh Comedy Awards

Gareth Richards, star of Frank Skinner's Absolute Radio Show and the Comedy Zone 2009, brings his debut solo show to the Edinburgh Festival. Gareth will be performing his 'exceptionally inspired and truly memorable stand-up' (Chortle.co.uk) between some funny, poignant and genre-defying songs. Gareth's set list will include such future smash-hits as the enigmatic Dave the Fridge, and the revolutionary Third World Girl. He will provide his own accompaniment on the Incredible Omnichord, an instrument he has rescued from the 1980s. Gareth will be standing-up between songs but you don't have to.

The first strand is his joyous stand-up comedy which includes one-liners; observational material with a sprinkling of wordplay and surrealism; and stories based on true events. Gareth draws from his school days, his aimless studentdom, his bewildering twenties and now his recent perturbing fatherhood. We'll encounter subjects such as family, technology, immigration, politics, and death, all of which will de dealt with somewhat flippantly. Which is good news really, when you consider it's a comedy show.

The second strand is the music. Gareth will be performing funny, moving and genre-defying songs from his debut EP, These Songs Could Be Used in Adverts. The show will include audience favourite, and first single, Dave the Fridge a whimsical and moving exploration of anthropomorphic friendship. It will also include the epic Third World Girl: a stadium anthem about how love can cross boundaries of race and political correctness. Don't Go Out With offers some advice to all the single ladies in the audience, and Gareth will also probably do a song about his mum.

Accompaniment will be provided by Gareth on The Incredible Omnichord - a strange and beautiful instrument which he rescued from the 1980s.

PLEASE NOTE: When Gareth plays the Omnichord he sits down. When he does stand-up comedy he stands. So he will be standing up between songs, but the audience don't have to...