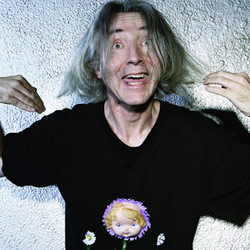 Emo Philips - 54th funniest comedian ever (Channel 4 survey). Last played Edinburgh in 2001; he out-sold every act on the Fringe. This is the show he currently performs in the States. '...a master of one-liners, he's way ahead of anyone else' (Independent); '...glitteringly sharp comic mind. It's hard to criticise when your windpipe is in a reef knot from concussive laughter' (Sunday Herald).