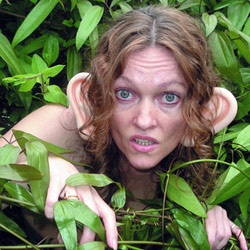 'Carole Jahme is Bio-Diverse!' is a comedy, exploring evolved differences between men and women. A gorilla and a Stone Age man will be summoned up before the dramatic finalé. The synthesis of magic and audience participation makes each show unique. Presented by a monkey-human hybrid creature (Jahme) who is desperate to find a mate. This show pushes the comedy/theatre/science art form towards a new spectacle. Carole Jahme is The Guardian's Evolutionary Agony Aunt, 'Ask Carole'. www.guardian.co.uk/science/series/ask-carole