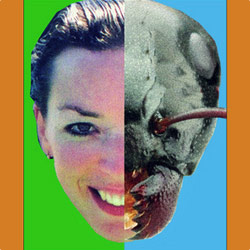 Bridget Christie used to dress up as Charles II, talk about the English Civil War and pretend to be The Great Plague. But this had no commercial value, so she gave up on that pointless nonsense. This year she's talking about cat-litter, priests and rude mothers. Bridget is supported by the first ever and so far the finest Ant comedian on the circuit, A Ant (Winner 'Nivea Funny Ant Competition 1993').