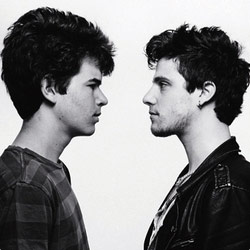 Two fantastic young comedians, Alfie Brown and Ivo Graham (Winner, So You Think You're Funny 2009), come together to bring their unique and exciting stand-up to the Fringe. Alfie Brown: 'A comic glint that sets him apart from his peers' (Chortle.co.uk); 'The highlight of the show... fantastic and diverse... his exploitation of grotesque language when lamenting the death of romance is brilliantly executed.' (ThreeWeeks); Ivo Graham: Chortle best newcomer award nominee 2010. 'One of the best young comedians around' (Time Out); 'The intelligence and maturity of Ivo Graham is remarkable.' (ThreeWeeks).

Two of the most talented young comedians on the circuit unite for a double-header as 2010 So You Think You're Funny? winner Ivo Graham and Alfie Brown each perform a contrasting, thrilling and very funny 30 minutes.

Ivo Graham's awkward persona and extraordinary wit has created a whirlwind of interest since he made the decision to start a career in comedy in 2009. At last years Edinburgh Fringe, the Eton and Oxford-educated comic performed in comedy showcase The Lunchtime Club before finishing first in the prestigious So You Think You're Funny? competition. Previous winners include Peter Kay and Lee Mack.

The 20-year old was invited to perform at the 2010 Montreal Just For Laughs Festival on the back of his debut run at the Fringe, reached the final of the Leicester Comedian of the Year and was nominated as Best Newcomer at the Chortle Awards 2010.

Alfie Brown, also of The Lunchtime Club fame - for which he received four superb reviews and one good review - has, unlike Ivo, received a grand total of zero awards since the start of his career, exiting at the first stage of every single competition he has ever entered. However, to those conversant with current comedy he is regarded as one of the most interesting and passionate new comedians around. It is his urging of love, morality and kindness through his dark, eloquent, crass and intelligent material that sets him apart from other new comics on the circuit.