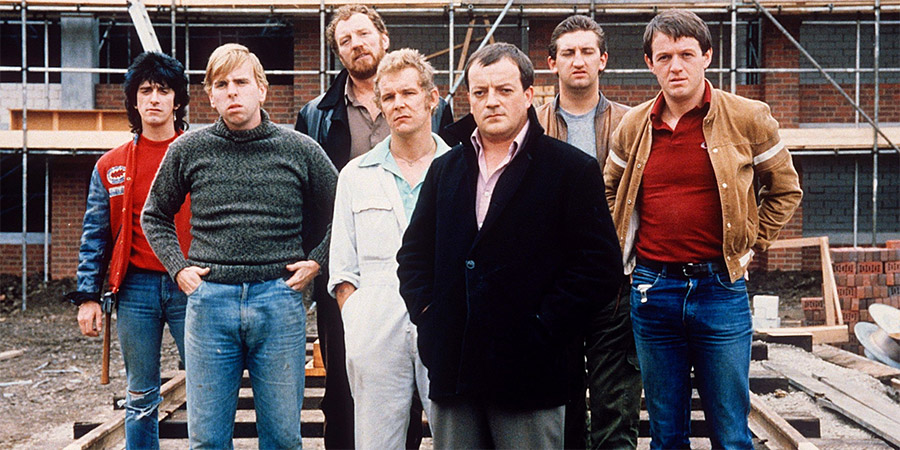 Six episodes in and I still think it's great. Only criticism, the Germans...
One female extra was a real German I think. Others are quite talented in speaking German but you can still hear a little accent...and the rest of the actors are rubbish at pretending to be German. Completely wooden, like the two "German" paratroopers in episode 4 of Dad's Army (and why do Brits think Germans finish every sentence with "ja"?!).
Maybe I'm a bit too pedantic but that mars my enjoyment of this series a little bit. But hey, otherwise I'm loving it!

I think Private Lives (episode 7) is one of the funniest episodes of any TV show. Full of non-stop coincidences but so funny and entertaining.

I think Private Lives (episode 7) is one of the funniest episodes of any TV show. Full of non-stop coincidences but so funny and entertaining.

True. Especially Spall and Holton are hilarious in this episode.

What about when Arthur gets caught on a sex video.
Impossible not to laugh when the lads spot him

Such a great TV series, one of the best made IMO. Series 1 & 2 are brilliant, I also enjoyed Series 3. Series 4 & The Special were good but I'm never too fussed about re-watching them. Overall though, still one of my favourites and I love to re-watch them on DVD from beginning to end when I get the opportunity, I don't watch them on Yesterday or Drama because they are edited.

Finally after years of searching - including Discogs - I've managed to buy a Heavy Metal Kids album at a charity shop. A bit more than I wanted to pay but when you've been looking so long you have to snap it up. Great hearing the voice of Gary Holton again.

Watching this all over again on Yesterday - still very funny.

If possible Herc get the dvds the episodes are cut to ribbons on drama and yesterday.

Thanks for that, I was thinking about it.

They used another location. Neville looks much older, Oz's black eye isn't black enough and Wayne's hair's all wrong. Barry isn't even wearing the yellow shirt he should be. They obviously filmed it because Barry gets them together so portrayed him as someone who enjoyed his time in the hut all of a sudden. It doesn't work or fit really. They should have just portrayed it so that he started realising how much the bond between the lads meant to him after they'd split up. Would have made more sense. He even says it himself "You don't know what you've got 'till it's gone".

I have only just rejoined the forum as my old account was with my old e-mail address. I haven't been on the forum for a few years and I saw your post this week about the photo scene outside the hut,and you are right about it being another location. I mentioned this on YouTube a few years ago and someone said they filmed the scene outside one of the Central studio buildings in Nottingham, they were having building work at the studio and this accounts for the crane and identical hut. The lorry behind the German worker blocks to road to the studios.

You made a good point about Neville looking much older and Wayne's hair being wrong, Wayne is also wearing sunglasses that I don't remember him wearing in Series 1, I didn't think about Barry's shirt, but it was mentioned on YouTube that Barry looks older and heavier and Dennis's hairline is thinner. Something I also spotted was Bomber's clothes appear different to anything he wore in Series 1 and he's also wearing a hard hat, I never saw him or any of the other English brickies wearing one before.

If I'd never seen a single episode, I'd still bet a fair few quid that this show is an absolute cracker.

If I'd never seen a single episode, I'd still bet a fair few quid that this show is an absolute cracker.

Personally I would recommend you watch series 1

It's good fun, a bunch of builders on a worksite in Germany - good idea and it worked well

I really wouldn't bother with the rest

Just wasn't anywhere near as entertaining

After reading some tweets from him the last few days, it appears that Noel Clarke (Whyman in Series 3 & 4) is interested in a revival of the series.

Quick everybody block him