Hurrah, it's finally here.
But I've never heard so many despondent people - admittedly only on the social media sites which as we have found out many times before, they are not a true marker of the general public's feelings.

I have a pack of masks in my car that will be doing one tomorrow and I shall at last be going to my favourite restaurant.

Wear a mask if you want to, it's no business of mine but Goodlad won't be.

Two-thirds of the country disagree with you, but, fill your boots, mate. 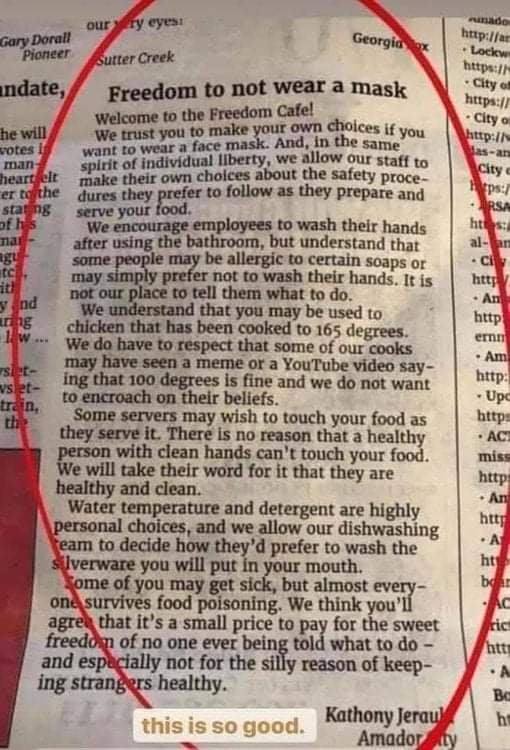 Talk about this government being hostages to fortune! They gamble everything on an arbitrary date despite all scientific and medical advice, then the Health Secretary himself has to self isolate and the Prime Minister and Chancellor will either have to self isolate or it'll be seen as one rule for them, another for the rest of us, on the eve of "Freedom Day". Johnson only has to see his foot to shoot himself in it.

Two-thirds of the country disagree with you, but, fill your boots, mate.

Two thirds eh. Not where I live.
It's time to live with it, like flu or bad colds. They are always forever going around.

Time to stop being frightened that death is just one step away. Without vaccination it was still 99.7% survivable.
I'm living proof.

I once stated before (and got slated) that the average annual death rate was normal and comparable to other years.

Apparently, BoJo and Richie are suddenly part of a 'pilot scheme' that allows them to not self-isolate.
Freedom Day will be when this bunch of chancers finally f**k off for good.

Two thirds eh. Not where I live.

Nationally.
It's not all about you, love.
Or, perhaps it is.

Go on then, give me those hard facts from a reputable source.
No cherry picking.

Where did you get the figure of 99.7% survivable without vaccination, Stephen?

Yup, gonna make all the difference. Covid will be over by Tuesday. Keep it up, lads.

Where did you get the figure of 99.7% survivable without vaccination, Stephen?

Probably on the side of a big red bus.

Poor Stephen! It's the price he pays for being the token right winger on the talk board.

Mind you, I think he enjoys it.

BORIS Johnson has abandoned plans to avoid quarantine after being contacted by NHS Test and Trace following a furious political backlash.

The Prime Minister and Chancellor Rishi Sunak had originally planned to take daily tests rather than self-isolate following meetings last week with Health Secretary Sajid Javid who has tested positive for Covid-19.

But in a dramatic turnaround Downing Street said the two ministers would be self-isolating rather than taking part in a daily contact testing pilot.

Effin Nora, it's actually getting quite amusing now watching this bunch of utter utter clowns trying to run a country

Haha! It's definitely sit down with popcorn in front of the TV time.