TV Screens go blank across the UK as Boris Johnson then appears on screen and addresses the nation in his sternest Churchillian mode.

BJ
As you will well be aware this country , London in particular has in the last fortnight been subjected to bombardment of its historic landmarks and deaths have also occurred.
As such I have come on television tonight to assure you that I will put a stop to this act of total barbarism. And while it remains a police matter, I will not hesitate to use the British Army on foreign soil should the need arise.

Screens go black then back to the shows it interrupted.

LE COP
According, to our intelligence department zis is ze location

LE COP
But zat is impossible we do not have ze warrant yet it is en-route from Paree by motorcycle it is zis process you understand?

CID
I'm sorry we can't wait this is of National importance.

LE COP
But if we go in now without ze warrent the magistrate they will not prosecute ze perpetrators. All will be lost. They will simply flee our jurisdiction if we cannot legally old them.

The CID Officers phone starts ringing and he indicates to the Frenchman that he has to take the call.

HQ
You have to nick them now Ken, right this minute!

CID
I would sir but we've no warrant yet. The Gendarmes are saying that that if we grab them now without one then we won't even be able to hold them!

HQ
I don't care they have to be shut down right now!. One's just gone right through the face of Big f**king Ben! It's worse than the V2s during the war. And don't worry about holding them , shoot them f**king dead if you get the chance thats coming from the top.

The CID man indicates to the Gendarme to start the raid the Gendarme shrugs and then gives the order.
The police burst into the barn and see a pile of pillows and crash helmets in one corner and a line of people at the bottom of a staircase holding crash helmets and pillows.

They rush past them and up the stairs where they see a massive catapult being drawn back by a petrol generated threshing wheel.
There is Chinese man in a crash helmet with a pillow under the back and front of his jumper standing inside the catapult.

There is a sign on the wall saying:
CENTRAL LONDON IN UNDER
2 MINUTES £200
NO PASSPORT REQUIRED

A man is holding a Tourist map of London while watching a needle on the side of the catapult.

The man then pulls a lever, and the catapult sends the man flying into the night sky.

The cop shoots the man with the map,

I really like the joke, but you could get there in about 3 lines.

Thanks for the read and I suspect you're right in fact I know you are. I just do these to keep my hand in and head up so I tend to over stretch them once I get into my 'Mood' . But again thanks for reading it .

First off, I was confused and thought the French woodland was the program we cut back to - so that set me off in an 'Allo 'Allo direction.
Gappy's right - essentially this is a very good sight gag that you've added about two hundred words to.
In fact Beaky could probably draw this sketch in one frame.
Adding statues/landmarks confuses too, as it runs the risk of sending you in a BLM/Pulling down statues direction.
I wonder if you could move it into the area of getting goods into Northern Ireland? More topical.
Butchers clutching armfuls of sausages as they're catapulted cross the Irish Sea might be a thing.
Big sign saying " New Northern Ireland Protocol Arrangements" pointing towards the barn....

I agree and I know you're both right, I mustn't let my time alone in the basement get to me. I will make the next one more concise and tighter as thats the game and I should be playing it. But again thanks for the read and lets hope Beaky does dip his quill into this one as I would love to see it.
As for the Northern Irish idea that beats my one. 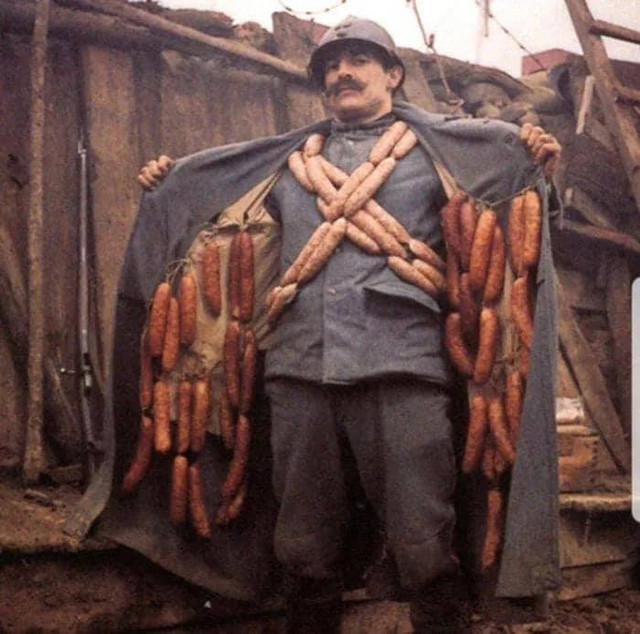 Find his agent we need this guy.

I've been to France loads of times and never heard anyone say ze,zis or zat

What can I tell you John I'm a sucker for stereotypes . Thanks for the read mate.