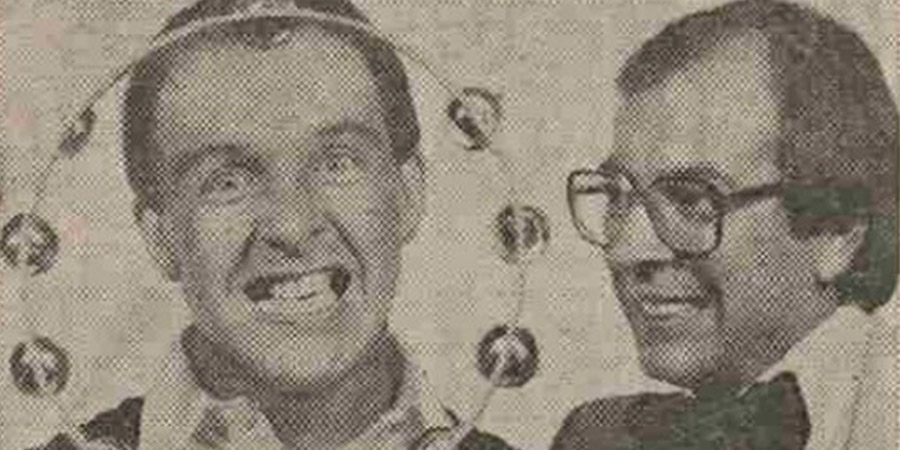 Never heard of them, but yet again, a superb Chronicle from Graham McCann on them in particular and the demise of the comedy duo in general.

First one too, where I burst out laughing with this, and I quote :-

They were hired to do a 'turn', as Barry would later put it, at a local pensioners' party 'where they were having cheese and onion sandwiches, and the presenter didn't know how to announce us'.

(immediately discarding, presumably, the options of naming them 'Plate and Sandwiches')

, and 'came up with "Cheese and Onion" - and it stuck'. Barry Neal thus became known as Barry Cheese, and Mike Knight became Mike Onion.

Their real names were Barry Neal and Michael Knight, and you would have thought the alliteration of Neal & Knight or Knight and Neal (or even, Night and Day?) would have been ideal, instead of the ludicrous one Pauline Neal dreamed up.
" They dreamed of becoming the new Eric and Ernie. They would fail even to become the new Mike and Bernie." And that's saying something!

(As Graham mentions them, and as an aside, - apparently the BBC were desperate to replace M&W and forced together Lennie Bennett and Jerry Stevens, and I saw and met them when they were booked as the cabaret to entertain us photographic dealers in a hotel in Nice. Jerry was a lovely introvert bloke, who left the razzamatazz to Lennie, and I remember talking to him in the bar before he went to bed early - I discovered that both of us collected book-matches, but he wouldn't let me have the BBC one he was using to light his fags. Grrrr. Lennie, however, was "life and soul" of the after-show party, getting drunk with one of the directors well into the night. I won't elaborate on what was said amongst the company gathered around that table, but it wasn't exactly vicar's tea party repartee, with some very odd drunken sexual suggestions!)

" The tragi-comic fate of Cheese & Onion, however, was simply so odd that it has kept their names fluttering in and out of Britain's comic consciousness ever since their demise and the decline of double acts in general. In a 2018 episode of Inside No. 9, entitled Bernie Clifton's Dressing Room, Reece Shearsmith and Steve Pemberton appeared as 'Cheese and Crackers' - a pair of washed-up entertainers who bore something of a family resemblance to Barry and Mike, while in the same year Danny Robins's darkly comic play End Of The Pier featured Les Dennis as one half of the long-since disbanded double act 'Bobby Chalk and Eddie Cheese', who were similarly reminiscent of the era, if not so much of the duo."

Ahh! Of course - I remember those two programmes well.

As I say, another excellent Chronicle, which you should read, if you haven't already.

I slightly remember them
They were just a poor northern club act.
Very amateurish.

In those days I went to see a lot of acts that later became famous.
Cannon and Ball
Even Paul Shane who always told the same joke about a dancing duck
And Chubby Brown when he was the drummer in a group and told crude gags between songs

The acts were brave in his those days. If they were poor, they either got booed off or told to get off by the committee man on the mic

Were you a wheeltapper or a shunter, Stephen.

It was like that once.
Sunday night was always working man's club night.
They were very strict on membership - no affiliation card - no entry. lol.

If you went to a certain Batley working mans club the acts that were performing at the famous 'Batley Variety club' were often doing a turn there too. You had to pay 20p to get in.
Acts like The Baron Knights always showed up and The Bachelors.

I didn't care for the acts much but it was always packed with Batley lasses. Half a bitter and they were yours

Love the Cheese and Onion saga. It'd make a good sitcom in itself.

Love the Cheese and Onion saga. It'd make a good sitcom in itself.

They were dire, they were naffer than naff, and this was at a time of great comedy naffness such as The Grumbleweeds who went for several series. Cheese & Onion managed just 5 episodes in the low season summer schedule for TV! They weren't even good enough to get onto children's TV where a lot of naff comics ended up.

This has reminded to watch that Inside No9 episode though.

Oh, I liked The Grumbleweeds, both on TV and radio. Just silly humour - nothing pretentious