Years ago I enquired at a Greetings card (and postcard) manufacturer whether they were taking submissions.
They replied with a very none committal answer saying if I send 10 of my best work including artwork - they would take a look.

I had no 'artwork, I presumed they would do that. Just good greeting card jokes.
There was no internet or home printers in those days so had to fold A4 paper into a card and a friend who was 'arty drew them. (he was on a profit share with me from the proceeds)

Eventually (6 months) I received a letter saying they would use just 1 and I would be paid £10 once it had gone into print.
The company was called Rust Craft and about that time, they were taken over.
I never received my tenner but the card was printed. I saw it on the shelves of greeting card shops.
Those were the days I thought getting published was going to be easy.

I'd pursue that just on principle. Or sue them?

You have to be ancient to get the pun. 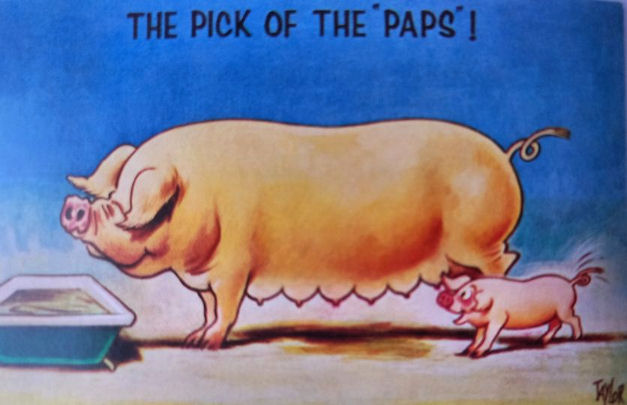 Is it? Well, what do I know - I only remember the Six-Five Special.

"Greetings, pop pickers - not half" Is that the original ?Where it all started.

Can't date it, but certainly could be a candidate. (I also thought the euphemism was much more recent)

I love the smile on the cat's face.

Can't date it, but certainly could be a candidate. (I also thought the euphemism was much more recent)

There was a 1931 song by Harry Roy & his orchestra My Girl's Pussy. Very risqué for the time.

(Have patience, it is almost a minute before the vocals come in.)

Love the words! Ooer missus. I can imagine the vicar's wife fainting when she heard it at the local Darby and Joan club.