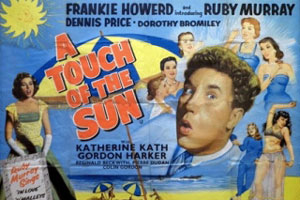 A Touch Of The Sun

I really tried to like this Frankie Howerd vehicle, and all was fine for the first third of it, then there was an utterly boring bit of him trying to live the life on the French Riviera, then the last third of him taking on the London hotel he deliberately got himself fired from in the first place when he came into an inheritance and basically told all and sundry to stuff it.

And the first time I'd seen the Irish singer Ruby Murray** in a film - actress she ain't, but has a good singing voice which she used twice.

It's not a riot, certainly - not the kind of thing we'd expect from Frankie now, given his later career - but I do like it. Good fun.