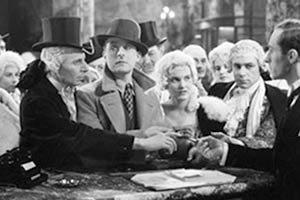 The only reason I watched this (as it was dire! Comedy - what comedy?) was because Alastair Sim was in it and I should think it was one of those films he would gladly forget. Odd thing is, he didn't look any different, with perhaps what hair he had was dark, and he played "The Lunatic", which just about sums the part up - I think he was hopping mad when he saw they had spelt his name wrong in the opening titles.