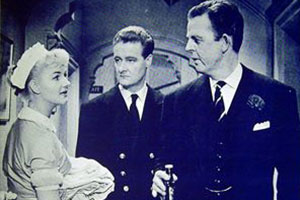 (Yank title The Ship Was Loaded)

What's this? A Carry On film that predates Carry On Sergeant!? Pure coincidence it seems and apart from a minor role for Joan Sims, this couldn't be further from the franchise if you tried, as it is trite and boring!! Mind you, so you know it's a comedy, there's jaunty music over the opening titles which are written in a jumbled cartoon style font - Yes! You're in for a gay old time.

David Tomlinson doing his usual silly arse and Brian Reece whose only claim to fame was being PC49 - a sort of Dixon without the warmth. Anyway, the two of them reverse roles of naval captain and government minister with hilarious results - so hilarious I really did struggle to watch it to the bitter end.

The two female interests I won't mention as I'd never heard of them, but the film did have some stalwarts of bit part players with AE Matthews, Alfie Bass, Reginald Beckwith and his "twin" James Hayter, Ronald Adam, Joan Hickson and it's that man again - Sam Kydd. It also had the unfunny Ronald Shiner.

Miss the boat on this one.

It also had the unfunny Ronald Shiner.

Did your first girlfriend have a major thing for him or something? Such derision!

I know I'm old, but I say that's a bit below the belt old boy.

Nope, never found Shiner shines for me - same as Tommy Trinder, could never see what people saw in him either.