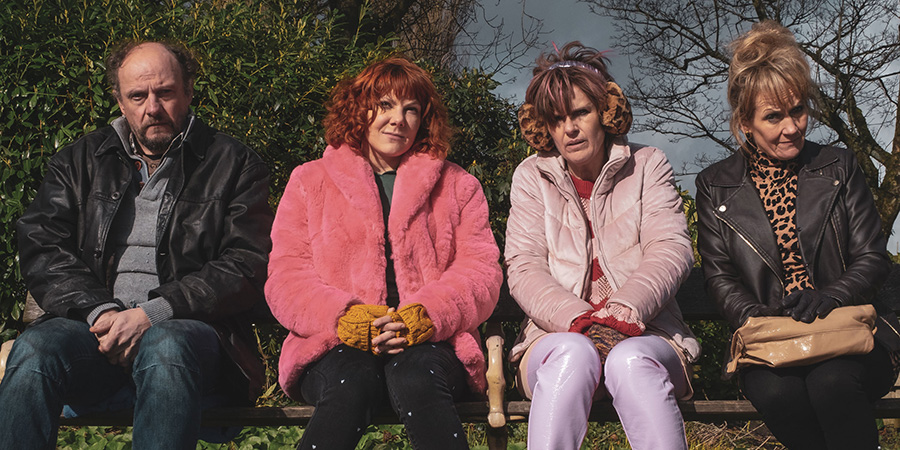 Comedy about a Boltonian woman, Alma, and her female-heavy family

Proof (if proof were needed) that the BBC still recognises quality comedy when it sees it.

Ok...this is interesting.Never saw the whole Pretty Woman/prostitution is empowering routine coming but this hands down has to be the most risque thing show on BBC 2.It's a little over the top in women just talking about sex all the time but it still has the heart of what I liked about the pilot albeit with the lewdness factor dialed up to 11.Half expected Sir Jason to pop up given the bit parts played by her Still Open All Hours alumni.Curious to see if this gets a season 2 because she sure didn't play if safe!

No, Fawlty Towers is fabulously funny, most would agree. Next to this marker that pilot could be no more than okay in the funny dept. Although I did think she deserved a show of her own, as she has a bit about her and she could act. And as we know, not all stand ups can. But what's worse is, these days they insist on doing their own material in them - I just don't don't recognise it as true sitcom. Good evening. Good morning.

I think this is a very good show, but it should be an hour long drama, because thus far, after two episodes, there doesn't seem to be a lot of 'com' in the 'sit'.

Ok...this is interesting.Never saw the whole Pretty Woman/prostitution is empowering routine coming but this hands down has to be the most risque thing show on BBC 2.It's a little over the top in women just talking about sex all the time

Do excuse my oft used line of criticism but is anyone surprised at this? (And this is not a dig at her but all of 'em and the broadcasters who are churning it out.) Female standups' stock material is sex and every one in the last decade at least who's been given their own show has been in seeming competition to make it the most risque filth fest on telly.

It's not exactly what the primetime sitcom slot is crying out for ffs. The broadcasters are clueless, they've got this vying with stuff that should be on Cbeebies like Ghosts, in with a load of dramadies and light soaps instead of developing genuine sitcoms. How can we go from making hundreds of genuine primetime viewing sitcoms to almost none in a few years?

It's like the train's come off the tracks. WTF are they doing at BH etc.

Something of the Mike Leigh about this.
I like it - very enjoyable, lot's of heart.
Siobhan Finneran's performance is outstanding.
And it goes out at 10pm, doesn't it?
Hardly the 'primetime sitcom slot'.

You say that, but by putting out so many in the same vein just over the watershed, surely it's shifted the old primetime sitcom slot to later? It certainly seems to me like there's very little on before 9 now - even the childish Ghosts is kicking off at 8.30! And there's a lot of comedy on from 9 to gone 10. The old distinction's also greatly diminished now by the use of iplayer to watch the show whenever you want to.

So as they make more of this kind of show it slowly changes the nature of the beast. This is a world away from Dad's Army or Porridge or OFAH that entertained millions for years - And still doing it because so few want to watch what they are making now!

I find it very hard to comment because - for me - linear TV is dead in the water - as it will be for more and more people.
Apart from live sport it's incredibly rare for me to watch something as it goes out.
You find what you want, and watch it when you want.
TV has never been better.

Absolutely agree.
After reading the comments here, I had to have a look with my sceptical eye.
If the writer is writing from experience then she had a tough time.

Alma rolled with the punches and always got back up - even her horrible boyfriend was accidentally funny.
(something like 'I cant help being a c**t cos I am a c**t')
The cafe boss and the drama teacher, all brilliant characters.
Hope there is another series.

Yes! It's brilliant . Funny and sad .

Apparently it is her life story loosely told.

I was really gunning for her after the pilot last year but 3 episodes in not so much now.If you take away the sex and swearing its getting a bit too shallow and not really that funny. pulling series 1 and 2 back in 2006/08 was the best female lead sitcom of this century and it still is.

I'm watching this now and my TV says to resume - ie I've already tried to watch it.

Not great but I've always liked Lorraine Ashbourne, a stalwart of BBC Northern dramas and married to Gollum.