Again, a short film (shorter even than my previous review Breakaway (1956) - this one being only 1h 2m!

Didn't think I'd like this when it started, but it soon turned into a cracking tense yarn of a planned robbery of an "armoured" van carrying money from a bank, the money to be split with the bulk going to the organisers who were clearly the IRA, but for some reason referred to as the "Movement" all the way through the film. Very odd.

The only person I knew in this was the American actor William Sylvester, who appeared in a lot of British films and TV of the period. Oh, and the pretty Italian actress Marla Landi, for the second time who retired early to marry Sir Francis John Vernon Hereward Dashwood, and it seems, she is still alive at 88.

So, one of the English robbers, and friend of Sylvester, is killed (or so it seems) when the getaway car crashes and his is the only body in the car. The other person, seemingly legging it with all the loot. Sylvester and the Englishman's love interest (Maria) try to get to the bottom of who killed their friend and where the money and the other man is.

You can see clearly where this is going, but it still makes for a very good ending.

Another very short CFF film with the usual four kids on an adventure around the bomb torn streets of London, and I love these for the social/geographical history, as there are parts of London that look the same and others not recognisable at all.

Also we see these kids in and on street corners that are not only devoid of traffic but have no parking restrictions, but now, thanks to the excellent detective work of posters on the Reelstreets site, you see the same spots now heaving with traffic and not only yellow, but also red double lines - SO much has changed in 60 odd years. ALSO, it's notable how many streets now have avenues of trees.

Yeah, so these kids (one is a just about recognisable Frazer Hines) damage the girl's Dad's saw and so try and raise money to buy a new one, and along the way we see Wilfrid Brambell as a tramp in a non-speaking part. Of the other three kids - the girl, born in the USA, but you wouldn't think so, did little else after the mid-60s, for the older boy, this was his last film and the sweet little mixed-race boy, who I recognised from his only other film "Peril for the Guy", which I have reviewed previous - so much for his film career!

Mention must be made of the, again, excellent spotting and naming of the many obscure (!!) vehicles that appear, on the IMCDB.

'ere Herc, give us a shout if they ever show The Third Man will ya

I love the film but love Alida Valli even more. She was stunning in this There's a fabulous 4k restoration of this around.
Might have to treat yourself.
I did - but I've watched it 3 or 4 times since - so well worth it.

EDIT: No I didn't - it came free with BFI Player subscription.

Will do, but being a classic, I can't see it coming up on TPTV, but I do check all the free to air film channels, so will certainly let you know.

BUT, there's a Special Edition of it for only £3.49 post paid BIN on eBay, and some of us are flush with Euro betting money.

They've got the 4K restoration for an extra quid....

Another one I've got on tape.........and all I can do is look at the box.I'll have to do something about it.
It's the perfect film,I think.

It's a stone-cold masterpiece.

This is an odd 20-minute short from the Woodhouse family - Barbara (Walkies!!) Woodhouse, her doctor husband, two children and a Great Dane called Juno.

Mummy Woodhouse (only just recognisable**) has a headache and Daddy Woodhouse has to go to work, so there then ensues a "funny" skit as the children do the house work, while Juno goes and does the shopping.

Clearly the dog is well trained and it is impressive to see it wait at the zebra crossing, with shopping basket in mouth, looking both ways and then queuing up in the village shop for the groceries, and then barking at the lady behind the counter when, on checking the basket Juno finds she has missed "Biscuit for Juno" on the bottom of the shopping list.

The kids make a mess of everything, Daddy comes home, Juno comes home, and they all have a laugh.

**My wife and I are convinced that the mother in the film is not Barbara Woodhouse, but all references I can find on this shows that it is her. Of course, it could be that everyone is copying what one site originally said, but I have checked her family history and her second husband was a Dr. Woodhouse and two of her children were called Judith and Patrick.

What do you think? Are they the same woman? 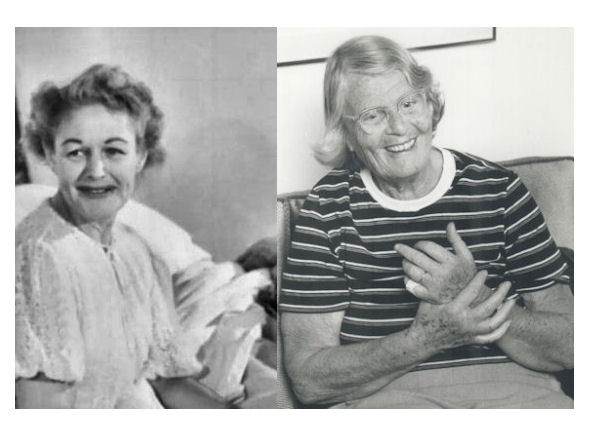 Yes. Nose, cheekbones, crease down cheek and chin. It makeup that confuses.

Yes. Nose, cheekbones, crease down cheek and chin. It makeup that confuses.

Yes, good pointers. I thought the nose was the same, and can see now what you mean about other features. I would say the photos are some 30 years apart.

UK B&W Films on TPTV that I haven't seen are thin on the ground at the moment, just in case my film review fans are wondering what was going on

But it wasn't a bad film, with a good story and all done and dusted in under an hour.

Rotten egg Peter Reynolds (Boo Hiss - I've seen him in about three films now where he plays a not very nice person), has an affair with is boss's wife and also forges cheques on the business account - a business that is struggling to survive.

Couple of twists at the end, made for a quite enjoyable film.

Another one of these totally misleading film posters (see below) as it suggests some naughty goings on between a man's wife, involving maybe a policeman - it couldn't be further from the truth. I think if I was a cinema goer then, I would demand my money back. So, Geoffrey Keen (usually a bank manager or senior police officer) runs a bakery, which is infested with rats in the flour storage area and enlists little Irish rat catcher (Dermot Kelly, who was the milkman, by the way in the Tommy Cooper version of The Plank) BUT he uses Cyanide to bait them, which gets accidentally into one of the loaves.

So, the chase is on the next day to stop a young woman from eating the bread, after the policeman (Gordon Jackson) realises what has happened, when he finds the drunken rat catcher dead on a railway embankment.

Actually, not a bad little thriller (58 minutes), and worth a watch.

I'm almost embarrassed to say I watched this CFF film from TPTV's Saturday Morning Pictures, but I suppose to see just how bad it could be. All the child actors did virtually nothing beyond this film, with one of them, Andrew Motte-Harrison, it being the only one, which I'm not surprised at, with a name like that and wooden acting.

Did recognise one of the baddies, Raymond Rollett, but he also did not much else, dying five years later.

Little bug-eyed non speaking (used whistles and thought transference) alien, wrapped in what looked like a bath towel comes down from Venus to have a few larks by changing himself into a flying saucer, and help the children have a gang of naughty men arrested.

At 50 minutes, it was worth the waste of time.

I especially wanted to see this Edgar Wallace based film as I thoroughly enjoyed the late 60s TV series "The Mind of Mr JG Reeder" starring the excellent Hugh Burden - I have the DVD of the surviving episodes, and I think they are currently running on TPTV at the moment.

Anyway, this film was nowhere as good as they made the plot difficult to follow by putting too many twists in it AND it suffered yet again from all the male leads poncing about in the same suits, slicked down hair and/or trilby hats, so you struggled to see who was the baddie/goodie, though the villain did have a tash to identify him.

So, it was basically trying to infiltrate a gang of money forgers, who it turns out, were ironically hold up in a defunct jail.

JG Reeder was played by Gibb McLaughlin, whose last ever role was as "Old man in Library" in HHH "The Missing Page", and the heroine was played by the very pretty Sally Gray, who I'd come across before when she retired from films early to marry Dominick Geoffrey Edward Browne, 4th Baron Oranmore and Browne, 2nd Baron Mereworth, who died in 2002 aged 100 and she died 4 years later aged 91 - they'd been married over 50 years.

ALSO!! the poster was the most ridiculous I've seen so far! I mean, just look at this:-
There was NO man in a mask, NO woman tied up on a bed and what the f**k that green thing is wrapped in a sheet is anyone's guess!!! There was absolutely nothing like that in the film, and there was no mystery in Room 13................what utter bollocks.