" The inhabitants of a small village, led by a war veteran, try to catch a vagrant, who they suspect to be an escaped mental patient."

Starring primarily the slightly weird Derren Nesbitt as the escaped mental patient (?) who after tramping through the local woods and trying to find casual labouring work, holds up in a hay barn on a local farm where a bored teenage girl and her young brother befriend him.

The klaxon sounds at the local mental hospital indicating that a dangerous patient has escaped and so the local villagers set up a posse to find the girl and her brother for fear they will be killed by Nesbitt; but you can see the obvious twist coming up a mile off.

Nevertheless, I thought it was a good tense film and was generally given good reviews on the IMDb.

I've met Derren.He was in a REP play in the 80's.Well,I said hello and so did he.He wasn't blonde though which was a bit of a surprise.

I've met Derren.He was in a REP play in the 80's.Well,I said hello and so did he.He wasn't blonde though which was a bit of a surprise.

Hmm, that's interesting, as I've always known him as blonde and assumed it was natural. Also had dark lips, like he had lipstick on. Weird look imo and this seemed to suit him for weird parts and/or Nazi officers.

Not one for kitchen sink dramas, which were very popular then and usually written by angry young men, but this one was well written and brilliantly acted, especially by Yvonne Mitchell who was the title character. Supported by husband Anthony Quayle and son played by Andrew Ray. Also, the neighbour in the adjacent council flat was pretty blonde Carole Lesley who committed suicide when the acting parts dried up aged only 38.

20 years married and the wife has become dowdy and terribly disorganised at housework and everything she cooks is burnt as she gets so distracted by magazine reading - the flat is a tip.

He falls for the company PA, played by sexy Sylvia Syms and she with him, and his Sunday "overtime" is spent in her flat until she says he must get a divorce, something he keeps putting off telling his wife until one day.........., and this is where Yvonne Mitchell comes into her own as a wife on the verge of a total breakdown when she thought everything in their life was fine.
I don't know whether it was meant to be comic in parts, but there were a couple of scenes that made me laugh.

We've all seen plenty of escape from POW camps in WWII, but this one is set in WWI and I can't think of another, so wanted to see it for that reason and to see a 28 year old Jack Hawkins, who was the only actor I knew in it.

All seven of them in one room escape via the usual tunnel under the floorboards (SO claustrophobic!!), with one being killed in the attempt and thrown into the mix is a love story twist, and ironic that at the end when they all met again at a party to celebrate the escape, they said it was a war to end all wars and never likely to happen again, and of course a year after the film was released..................

Watching Who Dares Wins now. What a cast. 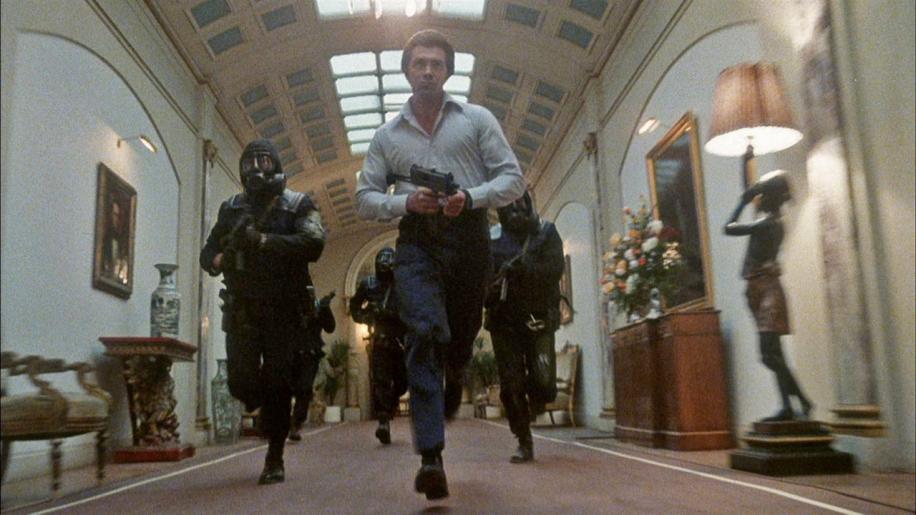 Too recent for me

Mostly good reviews of this on the IMDb, but I found it a bit staid. Number of well known names, with Ray Milland as Wing Commander in charge of officer training at RAF Cranwell, who comes to blows with hot head cadet Kenneth Haigh - the two of them having history in that Milland seems to have caused the death of Haigh's father in WWII. Apart from that weak sub plot there was very little in the way of a decent story, and only worth watching for the aeroplanes and equipment used in that period............if that was your sort of interest.

I suppose I must also mention Anthony Newley as one of the cadets who happens to be a bit of an aerodynamics whizz-kid who builds and flies a model flying saucer.

Otherwise, I struggled to watch it to the end.

Fairly straightforward story of two kids thwarting a gang of thieves who are using an unknown tunnel into the cellar of a big country house where the father of one of the boys keeps his valuable antiques.

Made primarily as a Children's Entertainment Film of the type that was put on pre the 1950s/1960s Saturday Morning pictures era.

No one famous in it - just an interesting curio.

The whole film revolved around the title as it starts with a court case of a woman on trial for the murder of her husband, but no one can actually prove she did it, so she was tried (the film title), and if found guilty would hang.

So, the judge's son, a respected doctor, gets himself involved with the wife (he is in love with and wants to marry) of a man who won't divorce her without £5,000 (now £145,000) via a blackmail for love letters, but the husband gets himself shot dead and the good doctor is seen leaving the scene and so two and two make four and he is arrested on the circumstantial evidence.

He pleads his innocence, his father resigns his post as a judge and all looks doomed, but the wife is determined to prove he didn't shoot her husband.

Good film actually and I recommend it.

The whole film revolved around the title as it starts with a court case of a woman on trial for the murder of her husband, but no one can actually prove she did it, so she was tried (the film title), and if found guilty would hang.

So, the judge's son, a respected doctor, gets himself involved with the wife (he is in love with and wants to marry) of a man who won't divorce her without £5,000 (now £145,000) via a blackmail for love letters, but the husband gets himself shot dead and the good doctor is seen leaving the scene and so two and two make four and he is arrested on the circumstantial evidence.

He pleads his innocence, his father resigns his post as a judge and all looks doomed, but the wife is determined to prove he didn't shoot her husband.

Good film actually and I recommend it.

On again this Monday morning 7.20am.

The title may be an off putter right away, but when one of the stars is a gorgeous 19 year old Diana Dors (not playing a vamp in this) you (me, that is) have got to see it. Also had in it an 18 year old Petula Clark (looking about 10), and a very pretty Natasha Parry who, like Petula, went to live in France.

The male leads were taken by Bonar Colleano, primarily an American who tragically died in a car crash in the UK aged only 34, and one of my least favourite actors Donald Houston.

Mainly about a local dance competition, forsaken love and jealousy, it made for a good film actually and I quite enjoyed it, especially as it shows what living in the UK was like in the early 50s.

I really enjoyed this spy thriller starring Robert Newton as a sort of early James Bond, but without the hullabaloo and razzmatazz, which makes for what you would expect a spies' life to be like in reality.

Fairly common story (then) of a scientist who is developing a nuclear device and has been hijacked by arch international villains. They say he is dead, but the Secret Service think they are holding him somewhere and so the search is on.

Parts also for Guy Middleton (Army Intelligence), Herbert Lom (briefly, for the baddies of course!), Valentine Dyall (briefly as the British spy master), Leslie Dwyer (Mr Partridge Hi De Hi as a doomed in-between), Marius Goring (who gets executed as a spy in the first five minutes of the film, when he won't reveal what he knows - silly man) and Wilfrid Hyde-White (very briefly as a moustachioed London cabbie). Love interest was fitted in by pretty Muriel Pavlow as an Austrian refugee with no ID living in the UK whose family were Nazis, and she had some part to play in the spy connection - I see she died only last year aged 97! And 20 years ago, in 2000 played the part of an "Old Woman" in the TV sitcom "Black Books" - I'll have to dig me box set out!

Really big fan of Robert Newton and have watched him in some superb films ("Odd Man Out" for one with another of my faves, James Mason - superb acting in a brilliant film, made a year after this one), and Newton of course set the mould forever for anyone playing Long John Silver - all impersonations of the character are in effect an impersonation of Robert Newton playing that part in the Disney classic, L.J.S. forever being known for his West country accent thanks to Newton.

"Ooh Ahh, Jim lad, be a sailin' on the mornin' toide, so we will, shiver me timbers if tha' bain't be roight, Ooh Ahh"

Well worth a watch.

Muriel was very popular in our house in the 50/60's.My father was quite smitten.She was pretty and very petite.

Speaking of James Mason as we were, and the only reason I watched this for two hours! Not really my cup of tea, which was primarily set in the Georgian period with lots of heaving breasts and bodice ripping.

Young couple in uniform at a WWII auction (Stewart Granger and Phyllis Calvert) of a house selling off all the contents and both have come to buy memories of their ancestors who lived there, and so, (wobbly screen) as we are taken back to a strident Mason who marries sweet innocent Calvert purely to produce an heir, and all goes according to plan until the poor nasty vamp Margaret Lockwood turns up and inveigles her way into both of their lives, with the intention of taking Mason away from his wife. Throw in Granger who falls in love with Calvert (with me so far?) and eventually it all goes pear shaped for all concerned.

Good film as it turns out.