Two token Yanks this time in the shape of Richard Denning (secret service) and Carole Mathews, playing the part of a German cabaret artist (the accordion - WOW hot stuff!!) so you don't notice her accent and I presume she is the redhead in question, given this is a B&W film............., with Ronald Adam (normally a high ranking policeman) playing the mastermind criminal and Danny Green (The Ladykillers) as a German heavy all chasing $12,000,000 of Nazi forged dollar bills.

It could have been a good film but got bogged down in so much detail and red herrings that you lose interest and not care what happens to any of them. The dockside warehouse scenes I'd seen before, even the ladders they were climbing to the roof (yes, you can see where this is going - again) for the final fight before the villain falls to his death. Aaaaaarrrrrgggghhhhh! Trump.......I mean thump.

This was a struggle to watch as it was a fairly pedestrian thriller. Michael Gough as the husband reappears after going missing for two years in a jungle plane crash and his wife Elizabeth Sellars bumps him off, although she is cleared of murder, and so the screen goes wobbly as the story of his return and death is retold.

Family friend is played by Leslie Howard's brother Ronald and tiny Edie Martin (The Ladykillers) is one of the jurors, and Jon Pertwee's elder brother Michael has a minor part in this wot he wrote.

Few pre war films make the grade and this one doesn't buck the trend. Won't go into details, apart from there being no murders, no flash cars and if you're interested in the stealing of a new formula for a paint, then this is for you.

Leaden plot, leaden actors and the only person I knew in it was the unfunny Ronald Shiner.

Watch if you have an hour to waste.

I've decided now that any film with James Mason in it is going to be a cracker and this one certainly was with his superb acting.
Very good murder and revenge tale, with Mason's first wife Pamela as the centre of Mason's obsession with her being the villain of the piece.

The film starts with neurosurgeon Mason lecturing university students how the brain can take over a person and with flashbacks you realise quite soon that he is telling them about his love for a married woman who dies - was it suicide or as he suspects murder, but rather than tell the police what his thinks he decides to deal out his own form of justice.

Very good gripping film, and he drives round in a lovely Bentley coupé.

One of those films that Richard Attenborough excels at, being totally forlorn as the man with the whole world seemingly against him as he is accused of murdering a young girl, and then most of the film is taken up by the court case as the evidence piles up against him and can see no way out. Is he innocent? He suffers blackouts from a head wound in the war and even he starts to doubt himself.

Good gripping film with one of my favourite actors (Attenborough) and some other familiar faces, such as Derek Farr, Maurice Denham and Kynaston Reeves.

A must see, if it comes up on the box.

Difficult one to describe simply, so here's the IMDb storyline:-
"Doctor Fenton is abducted and forced to operate on a mysterious figure. Meanwhile, Inspector Austin investigates the murder of Fenton's assistant. All this has something to do with a missing diplomat."

Got a bit more complicated than that as various red herrings were set up and odd people were bumped off, and where is that bloody diplomat, or does he even exist?

Faces I recognised were Sydney Tafler, Anton Diffring, Desmond Llewelyn in an uncredited bit part and there's our friend The Major from Fawlty Towers again (Ballard Berkeley) as again a Police Inspector investigating the case.

I think this is the last in a short series of 4 that I have watched now, and it follows much the same formula - police baffled (!!), and call in famous crime writer and super sleuth Paul Temple (John Bentley - Noele Gordon's husband in Crossroads, and NO! I never watched it) and his wife Steve (very trendy for the day!) played by Dinah Sheridan.

Someone is bumping off women and in each case leaves their name "REX" in the vicinity (the first one, at the very start of the film is on a roller blind in a railway carriage compartment of the dead young woman), it's almost comical in parts, like for instance a night club singer gives Paul a note to see her after she has made her second appearance as she knows who Rex is, but as she starts to sing she dies on stage and an even funnier one later on in the film a woman is writing him a note in his apartment saying "I know who Rex is, it is..........." knock at door she stops writing, answers door and is shot. All sooooo clichéd, it's laughable, like .......and so the shot man got up on one arm to point out to the detective the murderer in the room............."It's...................." slumps to floor.

No one of note I recognised apart from the ubiquitous Wally Patch, who makes an appearance as one of Paul Temple's underworld contacts.

Good film, if a bit messy.

Fairly second rate second feature B movie, thank heavens it was only about an hour long.

No one of note in this one, apart from Canadian/American Lee Patterson who I've seen before as a radio presenter/reporter who tries to drum up stories by raking over old unsolved cases - this one being a £20,000 robbery where one of the criminals has just been released from prison and so our plucky, if stupid reporter tries to trace all who were involved and retrieve the money.

Pretty boring stuff; BUT a very nice and unusual Austin A40 Somerset Convertible was used in the final car chase - looked a bit dumpy for a getaway car (!), but nice to see this odd model. 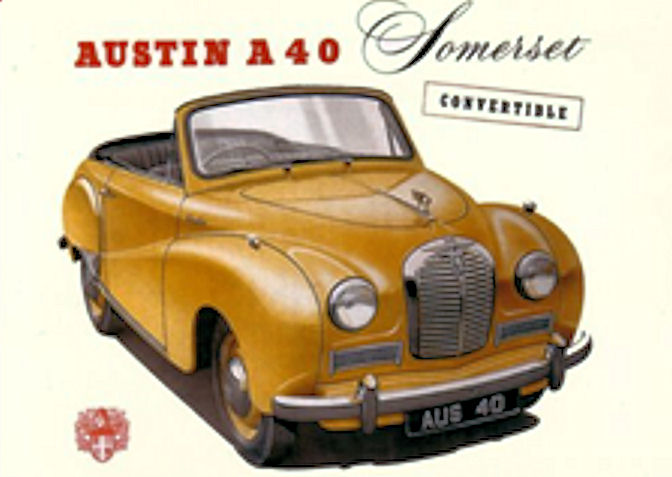 Never seen one of those.

Just remembered, there was a grille for one of those come up on Bargain Hunt last week. Think it went for about £40 as the badge was missing.

I was unsure as the TPTV blurb wasn't very inspiring, but it turned out to be a good film, with Michael Denison in the title role and his wife Dulcie Gray also in a leading part, with a surprise casting of Pete Murray, the DJ, as their son.

Jonathan Dakers is forced to take up medical practice in a poor part of town and sets to, to not only get the ailing practice on its feet but also take the local factory owner to task for the poor working conditions and hovel housing he puts his workers in, which causes them so much illness; but a friend of the foundry owner is a local rich GP who runs the local hospital, so Dakers has double trouble.

Throw into the mix a woman he loves who doesn't love him and another woman who loves him but he doesn't know it or acknowledge it.

Good thriller with Gordon Jackson as ex-con (minor embezzlement case) who changes his name and makes something of himself UNTIL seedy Sam Kydd (hooray!) recognises him and starts to blackmail him, and June Thorburn (who very tragically died at only 36 pregnant with her third child, in a plane crash) helps him with his life.

Along the way an old lady is murdered and it all comes to a head, but I won't spoil it.

Don't see many films featuring the American actor William Sylvester, and in this he seems to be an escaped prisoner given a lift by a woman driving a Jowett Javelin (first one I've seen featured in a film), who is going to a house to pay off the blackmailer of her soppy weak willed brother, and for £50 he agrees to pretend to be her lawyer, to call the bluff of the blackmailer; but when they get there, there is a mixed bag of ne'er-do-wells who also want the blackmailer dead, including a very dodgy butler.

Classic "Cluedo" type set up you could say, and not a bad film.

Heavily edited it seems, so was only about an hour long with a very young looking John Mills (one of my faves of course) being a jolly good egg after being one of only two survivors of a ship destroyed the German navy - the other survivor being an almost unrecognisable 17 year old Jimmy Hanley.

Can't get my head around this (perhaps someone can explain), BUT just prior to knocking six bells out of each other at sea, the German and English crew from officers down to OR are in port where they play and drink the night together with all of them being jolly good pals. Wha??

So, to slow down the German boat from repairing their ship so a British destroyer could reach it in time to er, destroy it; John Mills gets himself on a small island, and with a stolen German rifle and starts to pick off the German repair crew who are trying to patch a big hole in its side.

Not bad, but confusing.