Interesting shortish B movie and not a bad plot involving the smuggling of Nazi war criminals out of Europe via a German agent in the UK played by a just about recognisable 26 year old Christopher Lee. The star/title female part was played by Penny Evans who didn't do much more after 1953 it seems, although she did live until she was 94.

But the prize for me was to see a sadly all to brief appearance of a gorgeous 17 year old Diana Dors as Penny's flat mate and the D.I.'s secretary.

Worth a look, especially as it will only take up ¾ hour of your time.

Not a fan of Donald Houston - dunno why, summat just annoys me about him, but he is good in this as an ex-con who had just spent three years for an assault he didn't do on a local woman and comes home to the village where he is generally treated as a pariah. The woman he assaulted is then, very soon after his arrival, murdered - the woman turning out to be a local farmer's wife who flirts with just about every man in the village - so who did it? Surely not George Dixon's son in law Andy (Peter Byrne - DI in Dixon of Dock Green) who was with Houston on the night of the original assault and did not stick up for him when he was convicted?!?! Gets a bit more complicated than that, but I won't go any further.

Apparently, the leading lady by the way, (not the victim) was pretty Susan Shaw who I've seen in a number of films and apparently, she died of cirrhosis of the liver penniless in 1978 and her funeral was paid for by the Rank Organisation - see IMDb. Her real name was Patsy Sloots - just sayin'.

Lots of half recognised faces in this, including Katie Johnson (The Lady Killers main little old lady), and very brief appearance of Esma Cannon in about a 10 second scene.

I know the German classical composer Handel lived most of his life in London, but I don't think Irene Handl was related to him.

You can't Handel a small typo can you? You just wouldn't let it lie!

You can't Handel a small typo can you? You just wouldn't let it lie!

You know that's my handle.

Not Yank interference this time, but the original title was apparently A Stranger in Town. There was a Yank in the film though, which as we are now discovering was quite common around this time in British cinema - not someone I'd heard of or seen before for, but he did have the weirdest crew-cut.

Anyway, grumpy American genius pianist gets bumped off right at the start, but why? He had everything going for him..............or so it seemed. His uncle in the U.S. sends this sort of amateur sleuth over to wrap up his affairs and then finds that things are not what they seem.

It could have been anyone of the local villagers who had a penchant for walking around with shotguns as they all get involved with their pennyworth. Then when one of the prime suspects, a local gossip, gets bumped off too, the plot thickens.
Plot vaguely like the previous, but nevertheless, I enjoyed this about 1½ hour thriller/whodunnit, with again half recognised faces, including Harry Towb, Gretchen Franklin, Willoughby Goddard, Arthur Lowe and, there he is again, Trigger's dad Charles Lloyd Pack.

Classic crap B movie with no one of note in it apart from John Bentley if you were ever a "Crossroads" TV series fan, which I am not I hasten to add!

Blackmail and murder with a pathetic ending, which suggested to me that they had no ending so cobbled this one together at the last minute. Could have been a good film, but wasn't.

Very mixed reviews on the IMDb and I suppose I fall somewhere in between with being glad I watched it but not over impressed.
Involves the blackmail of a BOAC employee (Jack Watling) who works in the security compound, which involves regular shipments of gold bullion which the gang need to know the dates and times of so they can pull off the heist of the century.

Lots of familiar faces such as Richard Pearson, Terence Alexander (my God that man had an illustrious TV career, popping up in just about everything in the latter half of the last century), the Major from Fawley Towers (Ballard Berkeley), John Le Mez as Luigi

of the gang thugs, Arthur Mullard (also one of the gang - natch) along with, oddly, Arthur Rigby better and later well known as Dixon's station sergeant in Dixon of Dock Green.

Worth a watch if only for the hilarious punch up at the end.

Do you spend all your life watching this station?

I generally watch about one a day, but have been known to watch three, besides this list I am working from is a long one made from about Nov, last year when I effed off for about 6 months because of R*** E** who is no longer with us sadl happily.

Not a bad murder/thriller with ace reporter Paul Carpenter (the Canadian "American") again trying to solve it before the police do, and what the hell was that large 2 door American pre-war car he was driving? Studebaker? Nice. **

Would have been pushing it if it had been the usual 2 hours, so the approx. 65 minutes was about right.

Schoolboy witnesses a lady being stabbed, the boy in turn is murdered through mistaken identity when he swaps school caps with another boy who is almost murdered too - there, not too much of a spoiler. 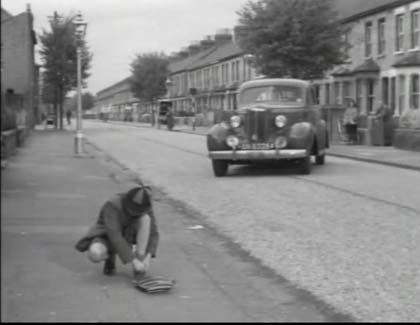 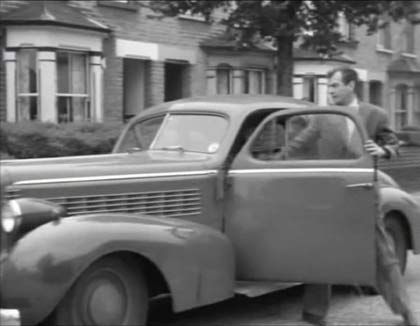 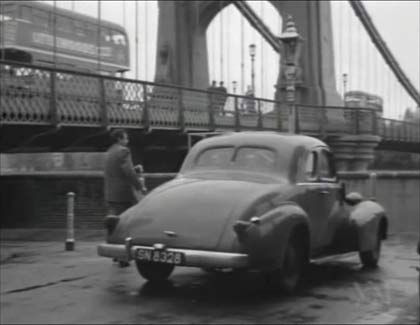 ** MUCH later research suggests it is a 1937 Cadillac LaSalle Opera 2-door Coupe - never seen one before.

You could a few bodies in that boot.(trunk)

I see a lot of American cars in British films, LH and RH drive, which I assume belonged to someone involved in the film as I don't think they had film car hire in those days, and it makes me wonder whatever happened to them as some were quite rare. Where are they now?

I see a lot of American cars in British films, LH and RH drive, which I assume belonged to someone involved in the film as I don't think they had film car hire in those days, and it makes me wonder whatever happened to them as some were quite rare. Where are they now?

Smashed up in accidents or explosions!

I'm watching the Pot Carriers. Supposedly a comedy drama although I haven't seen anything to laugh about yet but an OK film. Maybe an influence for Porridge with lots of faces from the time (1962).