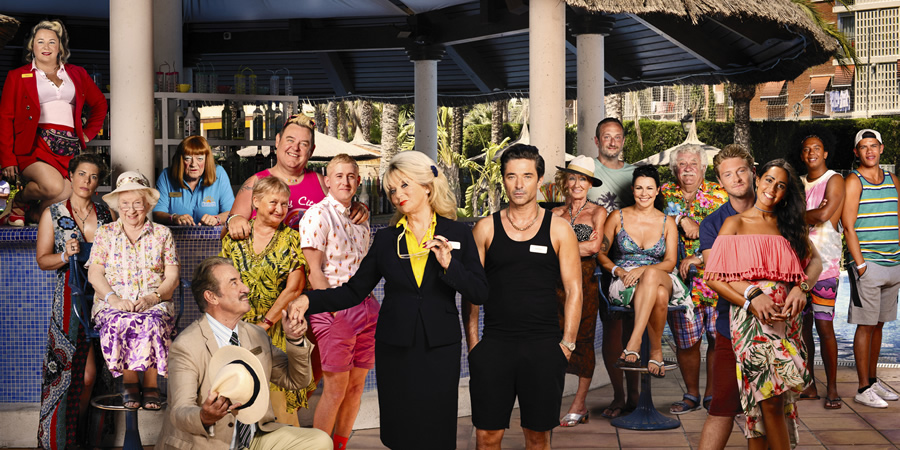 We went to see the Benidorm Live show in Aberdeen at the weekend. I really wasn't sure what to expect, but ended up enjoying it immensely. There are some brilliant laugh-out-loud moments, such as Mateo's dismal attempt at seduction and Gay Derek pledging his love for Kenneth. The whole performance seemed very slick, from the coordination of the background artistes to the changing of the stage dressings between scenes.

None of the cast fluffed a single word, but there was a slight wardrobe malfunction - near the end of the act where Derek expresses his attraction to Kenneth, the actor playing Derek (Damian Williams) tried three times to do up his trousers but the button kept popping open. In the end, he had to hold them up and sort of waddle about until the end of the scene - you could tell that Tony Maudsley was trying desperately not to laugh. The beauty of a live show I guess.

I believe the tour will continue into late April - I highly recommend it folks.

From the "Benidorm" thread:

Well, apart from Southern Railways cancelling my train home, it was an enjoyable afternoon.

It was exactly what it clearly set out to be - a bit of outlandish fun. No more, no less. A little more outlandish with its costumes and its innuendos than on tv of course (a Spanish taxi driver returning lost property, getting his metaphor confused "You'll lose your arse if it wasn't screwed"; Kenneth choosing a meal from the menu for Jacqueline "she likes a sausage in cider"). There were seven survivors from the TV series - Mateo, Jacqueline, Liam, Sam, Kenneth, Joyce Temple-Savage & the singer. The Kate & Martin characters, from the earlier series, were reprised as Sophie & Ben and played by different actors.

The plot, such as it was, was borrowed from a couple of tv episodes - the one where Kate & Martin (now re-named Sophie & Ben) first arrived and middle-class Kate hated everything about the hotel while Martin quietly enjoyed it and the other where hotel inspectors were known to be in the hotel but nobody knew exactly who they were (no I'm not getting it mixed up with Fawlty Towers). The first half was set in and around the hotel with the storyline interspersed with brief song and dance turns. The second half was set in the evening and spent entirely in Neptunes with the song & dance turns interspersed by brief bits of storyline. Sam (Shelley Longworth) was surprisingly good in the singing department but I thought Liam (Adam Gillen) was guilty of somewhat over-acting at times.

The sound system at Southampton wasn't great and it was difficult at times to make out what the actors were saying (it was loud enough but lacked clarity) but that presumably won't be the same in other venues.

The sound did tend to blare at certain moments. The theatre in Aberdeen had small screens at both ends of the stage with subtitles on for the hard of hearing - I had to glimpse at them a few times to know exactly what the cast were saying. Indeed, Shelley Longworth's singing number was very good.

I saw the final performance in Birmingham in December. I rather enjoyed it as a one-off standalone tour but I can't see it running again for any further stage show productions.

I felt it was a nice way to round off the success of the series.

Not out of stubbornness, but I just don't get the same comedy vibes from the TV show since the Garveys left. Namely Mick and his wife + her mother.

Just doesn't work as well for me.