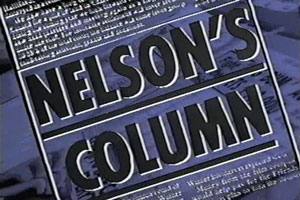 Does anyone remember the show Nelson's Column? I saw it on PBS in maybe '94. Would love to find a place to see them again.

It ran for two series.

You can find the final episode here:

The series concerns the activities of Gavin Nelson, who writes a column for his local newspaper.

When no third series was commissioned, I hear the writer Paul Mayhew-Archer pitched a series entitled "Trafalgar's Square" set in the late 1950s which tells the story of Tommy Trafalgar, a classical music fan who gets a lot of stick from his friends and workmates because he has no interest whatever in rock 'n' roll, skiffle or any type of modern music.

I understand the BBC turned it down but that Channel 4 are still thinking about it.

Yes I remember that. It was quite funny in places. DVD release would be good.

Turns out I was confusing it with Colin's Sandwich which is also set in a newsroom, starring Mel Smith. Nelson's Column was John Gordon Sinclair and Sophie Thompson.