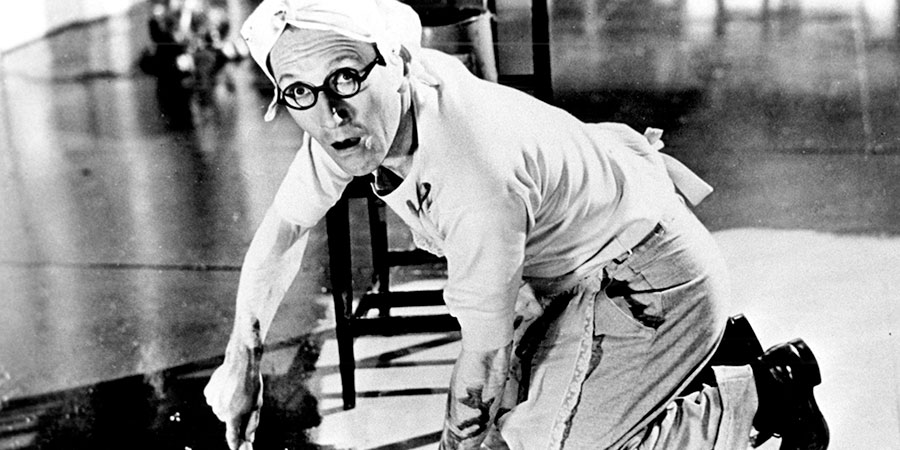 I recently watched "I Thank You" (1941), a very jolly and typical Arthur Askey film of the era.

The film opens with Arthur waking up alongside dozens of other people on a platform in the London Underground following an air raid. As he walks along the platform singing a jolly song, he sees a sleeping man who looks exactly like Hitler.

Arthur is shocked but sees that the man has a folded newspaper lying on his chest. He turns the newspaper over but - very strangely - the name of the newspaper has been deliberately blurred by TP TV.

Arthur continues on his merry way and the film continues.

In the original footage, however, the newspaper's name is clearly displayed as "The Jewish Chronicle" which suggests that the man in possession of the newspaper is a Jew and therefore not Hitler and therefore everything is all right.

For some reason, TP TV thinks the joke is unacceptable in 2018.

You can see the original footage here: https://www.youtube.com/watch?v=K1KkTxa49d0

The incident occurs at the very end of the clip.

The things you can hear or see in this 'free speech; country get narrower by the week.
They'll show bollocks and fannies on naked attraction but god forbid someone says poof on tv.

They showed a Charlie Williams clip (the old Barnsley black comedian) on our regional program the other night
It was littered with bleeps and silent parts (why show it) The jokes were lost because of it.
An example; ' don't cry love, if your mascara runs, you'll be (bleep) than me?

Was it 'more culturally relevant'?

I've checked with TPTV and it was their decision to censor the newspaper's title. They felt it was very offensive to Jewish viewers, especially as it was broadcast around Yom Kippur.

TP TV has about 2 million viewers and could be spectacularly successful if its popularity continues to grow. The snag is that huge numbers of old black-and-white films include language and humour that, although entirely unremarkable in its day, would be considered offensive by today's standards.

On a couple of occasions, OFCOM has had TP TV by the throat after receiving a complaint from just one single viewer (although I'm not sure it was the same person complaining in both cases).

If complaints continue, and OFCOM continues to sympathise with complainants, TP TV could lose its licence to broadcast and, in that eventuality, British television would, in my opinion, be very much the poorer.

Accordingly, it's not difficult to sympathise with TP TV when they err on the side of caution.

It bugs me - whether it was acceptable or not at the time, the programme/film whatever was made. If nothing was done at the time, I don't see an issue now unless it's something obvious like being broadcast at the wrong time.

What about Cabaret? Will the Anti-Semitic parts of that be banned?

What about Cabaret? Will the Anti-Semitic parts of that be banned?

What about the Sound of Music?