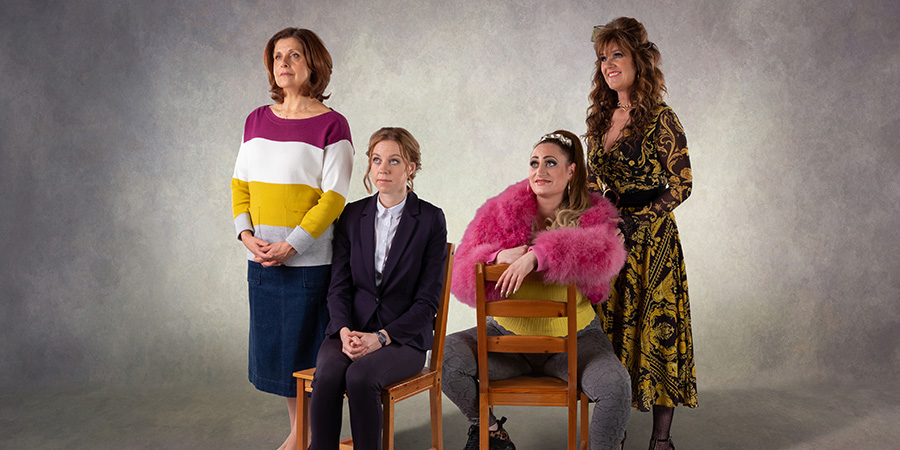 At 30 minutes, I presume this is going to be a sitcom; BUT the odd thing about it is the similarity in the premise being very much like "Back" that started last week on Channel 4 AND at exactly the same time and day...................

Not sure the premise is quite the same really. In Back the main characters are not related, and in fact Webb's character only lived with the family for 6 months. The death is the link perhaps. However, I think BBC putting up anything against Back is a dodgy move. Thank heavens for iPlayer and All 4. I never watch things when they are actually on the tele any more.

I didn't say it was the same, I said it was similar i.e. Father dies and two children meet up again - two sitcoms coming out at the same time, aired at exactly the same time, on the same day; but on different channels.

The Other One is written and produced by women, so not old boys in a literal sense at least!
Those coincidences do happen though. Like when Armageddon and Deep Impact came out at the same time. Or Antz and A Bug's Life.

Loved this. Very funny, and none of them are horrible people. Which is kind of refreshing.

Have you seen it zooo? It's supposed to be on tonight.

Unless I'm in a parallel universe, I'm pretty sure it was on last night!

It's the trading of ideas in a highly competitive industry. Ideas and themes of potential hit movies have been leaked, sold, obtained by agents and spies for decades and has itself been the subject or part subject of several Hollywood movies. There are probably examples from almost every year when two similar themed movies are released. The timing can be almost identical simply because the 'copy' wants to be released first to establish its originality in the minds of the audience and critics.

If the insider pulls off a clean job ie. doesn't get rumbled by the prod co. who've optioned or commissioned the first piece then the rival prod co. the agent sells it to has the time to make a decent picture by not rushing, especially if the insider passes on top info like projected finish date of filming and release date by distributor and copies of the screenplay drafts. It can make the agent richer than the writers, especially if it's a hit and the poor copied original movie screening weeks later then gets labelled as the copy or rip off. That, they say is 'Hollywood', or more generally now the whole film and TV industry.

It can also happen when an unscrupulous agent has sold similar screenplays to two rival prod co.s. If they air exactly together then it can signal a compromise, someone smells a rat and the two broadcasters agree to nullify the other, to avoid legal action.

It was on Wednesday. Sure to get a series. Good stuff. I prefer it to Back.

Managed to get round to watching this now and thoroughly enjoyed it - hoping it gets a series. Wouldn't say it was better than Back as personally I am finding them equally as funny in their own way.

Loved the set up in the church and the outburst.

Well that was the best pilot I've seen in a long time. I laughed all the way through, flawed characters but with a warmth woven through, very impressed, Holly Walsh is really on a roll with this and Motherland. Really looking forward to the series.

I loved it, looking forward to the full series next week!

I rewatched it too, and enjoyed it more than I'd remembered. I'm now much more looking forward to see what the series proper provides.

I watched the pilot on Friday, wasn't expecting to like it but I really enjoyed it. Looking forward to viewing the rest of the series.