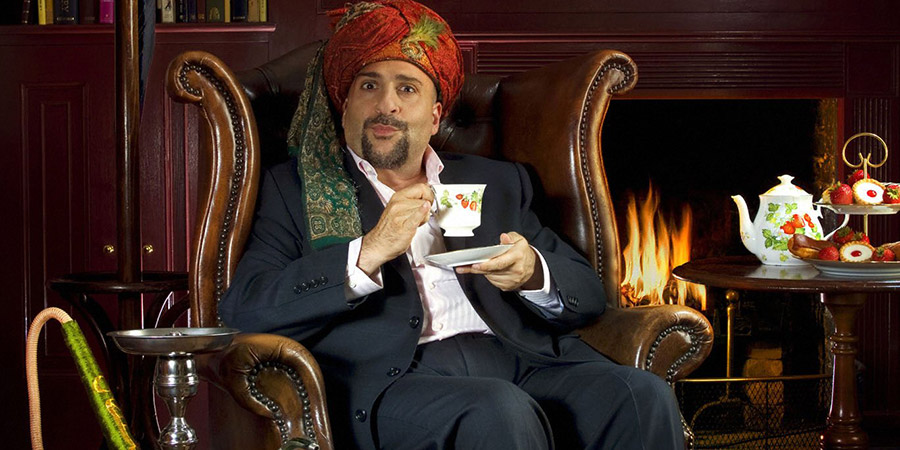 Omid Djalili unleashes his own brand of comedy, poking fun at modern life in Britain, the war on terror and his multi-cultural upbringing in Britain

I was pleasantly surprised. It had a ramshackle charm and quite a few laugh out loud moments. Yes, there were some lame bits (the Jill Hafpenny sketch was crap) and the production values seemed pretty shaky (poor quality sound for the stand up bits, and the sketches looked like they were filmed on a camcorder), but overall it worked very well. And the BBC should be commended for putting out comedy in a mainstream Saturday night slot.

I saw Rich Fulcher in the advert for next week's. (I think.)
Was he in the first episode too?

I've seen his act before and thought he was a nice and reasonably funny guy. Wasn't overly impressed with the show though. To me it was hit-and-miss, and the hits just weren't good enough. I switched off about 2/3 through and put on an old episode of Quantum Leap. It made me laugh more than the Iranian guy - there was a character in it called the Rev. Felcher. Laughs a-plenty. "Oh boy".

Edit: I also thought it would have made sense to air it on BBC3 - surely that's sort of what it's there for.

Boring and unoriginal - bit like his stand up, which is also appalling. Hackneyed references, and lots of putting on of accents. If a white comic did loads of turgid stereotyping it'd be called racist, but he does it and it's called intelligent.


I agree entirely. I thought it was dire.

This was the review of the show in 'The Knowledge':

"Omid Djalili is the inspired Iranian comedian, billed as "the undisputed Les Dennis of the Middle East", who burst onto our screens a few years back with a tour de force on Jack Dee's stand-up show Live at the Apollo. Now he has a series of his own, and his prodigious gifts are still very much in evidence. He looks like a mischievous pasha, with the agility of a dancer, a terrifying range of accents, a talent for mimicry and a clear eye for racial stereotyping. And he makes merry with the notions of cultural identity and differences. "For you," he says, "an Englishman, and Irishman and a Scotsman is a joke. For us, it's a hostage situation." Wonderful stuff"

I don't usually jump on the racial double-standards bandwagon, but I thought that the kind of material that Djalili was passing for a joke would have the Beeb burned to the ground if a white comedian would have made them. As well as that I thought that his delivery was self-conscious, his 'terrifying range' of voices consisting of a deeper, exaggerated Iranian bark and a Southern and a Hugh Grant style English accent, and his 'clear eye for racial stereotyping' involving lots of lame, faux-edgy gags about how we, apparently, all perceive Middle Easterns. I thought it was shambolic, I won't be watching to see if it improves.

Well, if an Englishman said:

"For you," he says, "an Englishman, and Irishman and a Scotsman is a joke. For us, it's a hostage situation."

Then it wouldn't really make any sense. It would be difficult to find racism in it!

Everyones right, though, he has been peddling the same thing for years and years. I quite liked the Osama sketch, but not much else.

If a white man did Omids act he would be Al Murray. Put that in your liberal pipes and smoke it

(I'm being a rude git tonight

If you've seen Omid's act before then his stand-up is nothing new. He always starts with an Iranian accent and then drops it shortly afterwards. Then the stereotypes kick-in. The thing is, have the mainstream BBC audience seen it? Probably not, unless they watch HIGNFY the other week.

Some of his sketches were completely non-race related which were good to see. I always worry about an act that has one-dimension ie I'm from here, I'm this race etc. You just know what to expect after a while.

There is a current act that is an Asian guy who is gay. The joke being 'what could be worse' and the whole act plays on that. All that does is give him license to talk about things other acts can't. I don't see how that is right, as the audience is still laughing at anti-asian, anti-gay jokes.

The best stand-ups are the ones that have more than a two solid issues to talk about, it shows they have a talent for comedy rather than a license to say what others can't.

If a white man did Omids act he would be Al Murray.

And also in direct contravention of the board rules.

Well, if an Englishman said:

"For you," he says, "an Englishman, and Irishman and a Scotsman is a joke. For us, it's a hostage situation."

Then it wouldn't really make any sense. It would be difficult to find racism in it!


"For us, 'an Englishman, and Irishman and a Scotsman...' is a joke. To an Iranian, it's a hostage situation"

Actually only just got round to watching the first episode. Personally thought the stand-up was better than the sketches. Its all new to me, cause I'm not really a follower of stand-up comedy so I don't know what was repeated (although I have seen Djalili in other programs).

Not bad. Worth another look.

Again, I enjoyed this week's show. I know I'll be in a tiny minority in saying that, but I did. It's got a good feeling to it, and it really is nice to see the Beeb going back to some mainstream variety-type stuff in a primetime (ish) slot.

Anyway, as I was saying, I'll be in the minority here, but to be perfectly honest, most of you are writers, and so neither I nor the BBC care much about your opinions; you're not the target audience.

Ahem. Anyway. Yes, most of his act is based on the "I'm a darky, and yet I'm also English - and a bit posh, ar-har-har!" thing, but for me it's done quite well, and uses it differently enough between each sketch (and studio piece) for it to not get 'old'. As is true with any sketch show, some of it falls a little flat, but like I say, there's a really good feeling to the show for me, and more than enough laughs to keep me tuning in each week.

If you are reading this, Mr BBC One, more of the same kind of variety-ish stuff please! It is, dare I say it, almost back to Morecambe & Wise stylee with a mixture of different bits and pieces. Very enjoyable, and something the British Comedy Guide will almost certainly support!

Loved the Hitler line too. Exactly my opinion.

Well tell us what it was then!