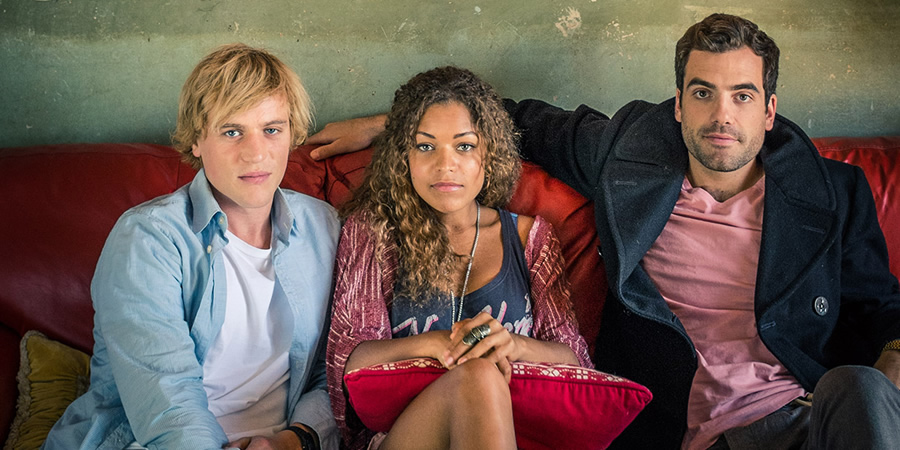 Sitcom about relationships, following a man who must contact everyone he's ever slept with to tell them he has chlamydia

Just seen that this has got Johnny Flynn in it !! As a long time fan of his music it was strange to see him in the trailer, but thought he was really good. Actually going to see him at the Barbican a few days before this comes out. Will definitely be tuning in. Hat's off to you for you to coming on the forum. Hope the show goes down well.

Thanks, Mattytheswan. Johnny's an amazing actor and he's excellent throughout the series. Really impressive range -- he can turn a moment beautifully. I think you'll be pleased by what you see (but then I would say that, wouldn't I?)

The plot of this show sounds like it was reverse-engineered from the title.

Hi Godot Taxi, I agree that it sounds that way. Genitalia plus memory equals show about remembering sex. Now, to the whiteboard! In its earliest incarnation circa 2008 it was just labelled "STD Quest Idea". It didn't pick up its current title until 2011, several months into development at the production company, by which point the STI-quest aspect of the show had long since become less interesting to me than the use of a non-linear narrative structure in a rom-com. But the title stuck.

STIs are not really the focus of the show though. The partner-notification thing is mostly a device that helps us flashback to specific points in one of the character's romantic history. But once we're in the past then the show's focus is on the evolving relationship between the three leads.

It doesn't sound to me like you have comprehensively thoughtlined the conceptualisation prior to marker elevation, but used that first movement to initiate sequences of possible cause and event scenarios - to evolve the strategy to best meet your ideological matrix in terms of narrative and regenerating central conceit?

It doesn't sound to me like you have comprehensively thoughtlined the conceptualisation prior to marker elevation, but used that first movement to initiate sequences of possible cause and event scenarios - to evolve the strategy to best meet your ideological matrix in terms of narrative and regenerating central conceit?

I am nothing if not precise!

I am nothing if not precise!

That's right. You are nothing.

Hello Tom - congratulations on getting your sitcom made and thanks for coming on here to answer questions!

Firstly, may I ask how you went from wanting to be a writer to eventually writing a sitcom that is being broadcast?

Here's the long answer to your short question!

I always wanted to write - and always wrote in one form or other - but in my twenties I struggled with the self-discipline required to finish drafts. I think it was probably a fear of failure; if I never finished something, I'd never have to face the work being judged and found wanting. So somehow I contrived to always be writing, but never quite completing my spec projects, finding Good Sensible Reasons to move on from half-completed screenplays. I got a couple of early breaks, a bit of rewriting work, and even an agent before I was really ready to make use of one, but it wasn't until I got comfortable with the idea of failure that things began to click for me.

Once I accepted that my work was going to be sub-par for awhile, and that there would be many bad drafts before a project started to take shape, and that none of that was the end of the world anyway... then I began to relax into the process, started to finish things, and sought out the toughest feedback I could find. In short (and I'm never good at "in short", as my producers will tell you bitterly) things improved when I stopped trying to write the perfect script and started trying to simply improve my craft. Failure became a process rather than penalty. I still fail, all the time, but I fail faster and usually know how to fix the problems I create. Or know someone I can ask for help.

So that was most of my twenties: dozens of abandoned projects while I worked a day job. Trying to learn my craft on evenings and weekends, plenty of faffing. Just before I turned 30 I was offered redundancy at the pay-the-bills job I'd been doing. It felt like a crossroads and I decided to try to make a go of it, doing some commercial work (writing ads and marketing copy, that kind of thing) to supplement my redundancy money, and writing hard. Around that time I got lucky with a few breaks: a spec screenplay I had written won me a place on a big BFI/Skillset scheme for emerging film writers, and a producer I knew from one of my first jobs out of uni asked me to pitch some ideas for cross-platform projects. One of these was bought by C4 Education, and that project ("Routes" C4 Education / Oil Productions 2008) got me 18 months work writing, and bought me time to develop my next projects.

It's a tough field when you're starting out. Nowadays when I'm working on a project it is invariably in close cooperation with experienced development producers - things develop as conversations instead of through hours spent alone in a room. Nowadays I'm also happy to take risks in a draft, confident that it can afford to go wrong a few times before it finds its final shape, and that the producer notes process will be friend not foe in that regard. But those first few spec projects when you're starting out are written in a vacuum, and that's very hard. I think the best thing would-be writers can do to combat this is to form writing groups. Meet to review each others' scripts. Peer feedback fills a problematic vacuum.

Another starting-out irony is that the first projects you are offered are the hardest ones to tackle. Books that will work great as movies, with strong characters, clear goals, high stakes? Those assignments get given to experienced writers. The assignments that newbies might get offered are the fringe ones; the hard-to-adapt books that indie producers have got the rights to because nobody else wants to adapt them! Not that I'm bitching - in the early days I was beyond thrilled to be working on anything at all. All I'm saying is, starting out is difficult in unexpected ways!

I've worked on other people's shows and had great fun doing it, but SCROTAL RECALL is my first outing as writer-creator. So far it's been a great experience, though I do think the 'creator' label is a bit like the "A film by" in features -- it accords far too much authorship to one individual. Our show's been a great collaboration between writer, directors, producers, cast and crew (and a very supportive channel, too).

I hope that it finds its audience... despite its divisive title. We've had positive previews in the Sunday Times, Mail on Sunday, Radio Times and a few others (and one almost-amusing snark-a-thon in the Guardian Guide). But whatever the show's future, I think we've made six distinctive episodes of a show we're proud of.

Bit of a ramble, but I hope that helps answer your question!

You're a very generous man, Tom.

Hello again - thank you for your reply. You mention that you got couple of early breaks, "a bit of rewriting work" and an agent, may I ask how these came about?